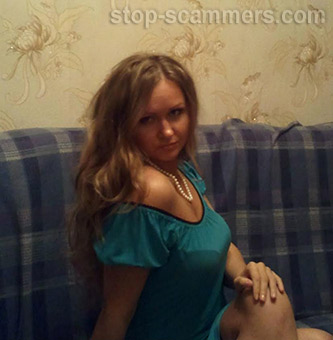 REPORT N1 (added on July, 2, 2015)
Alberto (Italy)
She contacted me from a site called C-date, telling me that I was an interesting person.
I reply that I was only in search of ****** adventures, but she quickly wrote for become friends and send me pictures of her.
She wrote me that she was working and living in her apartment and to be and feel very alone in life, with a dead father and an unknown mother, dead when she was born.
So began an internet corrispondance with daily letter and in each letter she sent one or two new picture of her.
Since the first letter I wrote her about my family situation and about our big difference of age (30 years), also telling her that I was married and on trouble with my wife.
She answered me do not think at difference of age because she was looking for a true love and started to write me very beautiful letters full of tender and lovely words.
I sent her some pictures of mine and she wrote me that I was the man she was waiting for all life. She wrote to be in love with me and no reason could separate us.
Letter by letter, I have to say that I wasn't insensible at her expression of sentiments, and I began to love her, because she was very, very lovely on her letters, full of sentiments, beautiful and romantic phrases.
For her I was the first man that she really loved in her life, and for no reason at world she would have lost the opportunity to be with me in Italy for her restant life.
She began make projects for our future meeting, but many times I wrote her do not to be in hurry because, first of all, I had to be separated from my wife and, at the moment, with impossibility to give her hospitality.
I told her that the solution of all problems needed very much time, but, in spite of my repeated words to be quite and waiting the resolution of my family problems, she wrote about her will to go to a travel agency to get informations how to do for come in Italy and his cost.
I was a little surprise of it but I permitted her to go for getting only informations for the future.
I asked her many times what would be happen to her work and apartment after her coming in Italy, but she never gave me an answer at these questions and I start to suspect something of strange...!
So she wrote to have gone to a travel agency introducing me a list of the expenses for the various necessary documents (480 euro).
I responded that they were so many money and this only for the documents, but I repeated not to go too much of hurry for the same reason of my impossibility to entertain her.
In the following letter she wrote me to have asked money in loan to her friends and her bank, without getting nothing. However she wrote me to have had the idea to sell a silver clock of her father that could give her 200 euro. To this point she has asked me to help her for the remainders 280 euro and I have started to suspect that she was a scammer.!