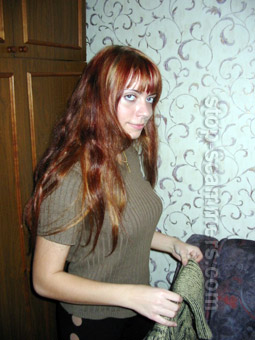 Romance scam letter(s) from Valentina to James (USA)
Hello, Scott! How are you doing? I'm doing fine!
Thank you for your answer on my last e-mail so much, Scott. In my opinion, it's so wonderfully, that we are writing to each other, because from our messages we learn about each other more and more, really, Scott? I'm interested in our correspondence very much, it's very interesting to learn about you, about your life in your country, believe me, as a whole, I read your letters with a huge pleasure! Ok, Scott, I hope that it will be interesting for you to learn about my enthusiasmes, my favourite things as a whole:)
From music???:) I like to listen the russian and foreign musical executors. From Russian musical executors I like to listen the songs of the following groups 'Zemfira', 'Splin', 'Ariya', 'BI-2', and so on. Did you heared about this musical groups? Ok, from the foreign executors I like to listen ' Bon Jovi ', 'U2', 'Cranberries', 'Scorpions','Elton John ', and so on. In general, I like to listen good and modern music, Scott, and what kind of music do you like? It would be interesting to me to learn about it. Please, tell me, ok? From movies? I like to look the comedies, fantastic films, romanticism and so on. But very huge impressions have left to me the films ' The Lord Of Rings', ' Harry Potter '. I hope what you looked these films? But especial impression was for me as the film ' The Patriot ' by an actor Mel Gibson, where the war between England and America is described. This film has liked t
Read more

Romance scam letter(s) from Valentina to Calvin (USA)
How are you? Probably, if you have guessed, this is Lyudmila :) I'm very glad to get your answer, Calvin!
First of all, please let me apologize for the delay in my response to you, Calvin, but I was busy in last time. I'm happy so much that you have written me, believe me, Calvin!
Also, I'm hoping that my e-mail was so big surprise for you too, really? But most important, I would like to say to you that I have decided to write you through the Internet thanking to my best girlfriend Natasha. My girlfriend Natasha have met a good man through the Internet from Germany, Berlin City, by the the Internet too. Her boyfriend is Frank. Natasha and Frank are very happy together! I see that they are happy so much together, and I have decided to find a man from other country too, as Natasha did it :)
Possible, you can ask me, why I didn't find a russian man? I will be very serious, I will answer to you, that I had a boyfriend from Russia from my City, I loved him very much, but he has thrown me in last time. He found an other girl, as I have understood.
Also I have seen that he liked to drink an alcohol very very much, as many men in Russia do it, may be you know about it. I don't like this when men like to drink so much as my last boyfriend did it! I am non-drinking and non-smoking girl! Simply, I don't have a harmful habits! Also I want to say that on the words of my girlfriend Natasha, the men from other countries, especially from Germany and USA, are very good
Read more