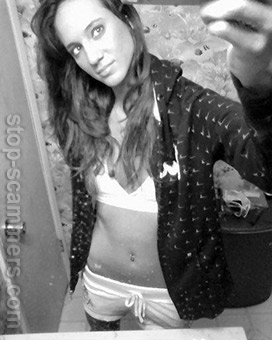 REPORT N1 (added on September, 7, 2015)
Viv (Australia)
Lisa initiated conversation on mate1 by offering to chat via message, then by email, and later asked me go on inter-chat. We have been chatting for about 2 week now. At first I didn't think anything was wrong but then bit by bit sounded like 2 others that I have reported n was heading the same direction. Lisa asked me to pay for a ticket to get back to the UK where apparently she has just moved into Hartford.she had been on a art trip and been mugged of all money. No money has been sent and I have not been in contact with her since.

Emails from Lisa Jefferson to Viv (Australia)
Tell me more about urself so we can know more about each other .

My Name is Lisa Jefferson 30yr .. I'm single with no kids never been married still looking . I just moved from US To Uk in Hartford Little more about me.I'm 5'7ft tall 119lbs.I'm white i have blue eyes and brown hair.I was born in Germany (Hamburg) but i grew up and raised up in the US.My dad was German while my mom was Native of American.I have been staying in America for about 14years now.. I went to Chris well girls High School..

After i graduated from high school ,I went to st Thomas university ,i studied economics got my first degree 2005 in accountant with the best grade and i went on to become a model did that also for 4yr was once a cover girl for magazine . At 2008 i became an award winner for best looking girl for the best front page modeling awarded magazine front cover not a big magazine but was close to the next best thing .

Then later i got into Arts due to the death of my parent sort of inspired me into painting so now i am a full professional Artist i have been to many show to show off my work been to Africa and Europe and many more countries .I am new to this internet dating things.I'm just trying this to know what Develops and Where God will lead this to..

Well relationship and love is all about trust and understanding... I got nothing to hide..I don't know how serious you are about getting to meet me in person.
Read more