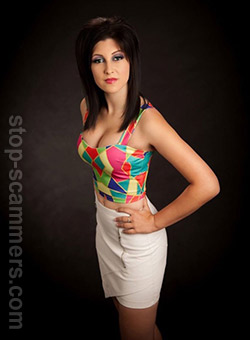 REPORT N1 (added on September, 21, 2015)
Sam (UK)
I met this women on a dating website and she claimed to be away from her home UK London in Kenya for only 3 weeks which has ended up as a lie and with constant excuse to not come the UK. The person claimed to have a farm and is just there for harvesting. After 2 weeks she says the farm was under attack from pesticides and was short of ?2k to send via money transfer. Than after it lead to needing ?15k because she would lose the land etc. This person is working also with who she says is her brother Alex carpenter who is on Google plus. They have used and played many tricks to get more money. One main reason was that his sister Kerie is very ill with COPD. Needed money for air ambulance to come back home to UK. I have copies of a British passport sent to me of this person to try and prove to me she is British and real and also picture of document she had 40 acres of land. She sent pictures of herself to be on the farm but pictures came up as another person with her face photoshoot on the real picture. I have kept everything i have of this person and no longer correspond with them. I was a fool and ****** and it became too late for me but hopefully it's not for others and hopefully this person can be stopped or caught. The brother is on Google plus and had others following so i can only wonder if they are playing the danger scam to others.

Emails from Kerry Ann Walters to Sam (UK)
How are you doing this is ann. you can call me Kerie as well. Ann is my middle name. few friends call me that but I prefer Kerie. Nice to meet you. tell me more about u x

How u doing do you have any plans for the Week ahead. reading your Messagereally says alot about u and thanks for sharing that with me // . I will explain something to u about me .
I am presently in Kenya now. I am from London/ but my mom is from Kenya I also have an Australian roots.. My mom owns a cocoa farm.. its like a family thing but most of my family member are old. So I am the one taking care of business and running it . Its one of the biggest in Africa. and one of the biggest in the world as well. I don't stay away often > I only come this time of the year. and spend a month or two depending on how much rain we get. then When its time for harvest we export to different companies in Africa . In a few weeks we should be harvesting so I should be back in about 3 weeks. .there lots of workers about 80 I have to monitor them working some are so lazy so I like to make sure everybody contributes in keeping the image of the cocoa farm. I also invest in Oil sometimes depending on the market , I am a also a consultant .My dad died years ago. so its just me my sis and my mom she is old now but she is a strong woman . .
My last relationship was about a year ago my partner died in a car crash we had a loving relationship. and it was fun filled with
Read more