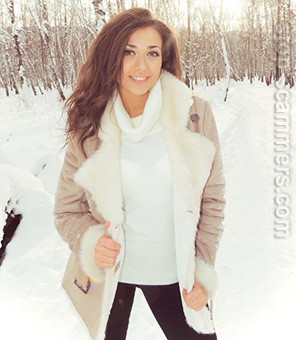 REPORT N1 (added on December, 14, 2015)
Trevor (Canada)
An email got past my junk mail in my gmail account from a young lady calling herself Natalya. She lived in a small community just outside of Abez Russia and she wanted to find a man interested in becoming a friend looking towards marriage. After sending me many pictures and talking with her for about a month a half she and I decided that she should come visit and that I would put her up while she stayed in Canada. She had the money for the flight and booked it. Then she found out she needed more money to travel to Moscow to get her Visa before she could come over. I asked for some proof that what she said was all true. She took a picture with a paper saying I love Trevor to prove it was her and she sent me a copy of the travel agencies receipt which was in Russian. So, I foolishly sent her $700 to get her to Moscow and to stay a few days until her Visa cleared. The money was transfered by Western Union to her name to be picked up in Moscow which she did. Then she learned that she needed to have about $2800 saved up before they would allow her into Canada as a visitor. Thankfully I had promised my kids I was taking them to Disney before I started talking to her so I had a valid reason I could not.
REPORT N2 (added on April, 18, 2018)
Jim (Canada)
This person contacted me. I did lots of photo searches and got I think some hits from other sites. Then by accident I found her on this site using the name Natalia Broomkin. Some photos were almost the same and some were rotated. That person was writing a man in Canada and he sent her some money. Maybe the writer thinks Canadians are ****** enough to send money, not this one. Will never send one cent No doubt I will get a phoney address. Will try for a passport One trick I have been using is to tell the scammer my country now requires a photo government document before sending money via Western Union and they will use the document number as part of the secret code to allow it to cashed they must show the document Writer has yet after over 20 letters to ask for money but we all know it will happen.

Emails from Natalia Broomkin to Trevor (Canada)
Thank you for the photo. I hope that you still go. Very nice!
Yes, I work full time as a nurse. My work schedule flexible. always different.
Trevor Can talk to you about the secrets? you do not want to tell anyone. That no one would know. I have told no one. And I do not know anyone who knows you. What would you tell them. And I'll keep it a secret. You have to have such a secret? I'm easy to talk with you. I do not know why. But I think it's because you're away. We are all familiar with. But some force unites us. And this pleases me. I want to get to know you more and better. To them I can recognize you.
Because you do not hide anything, and I'm not hiding anything.
Trevor I can tell you that, do not tell her friends. I can tell you that sometimes in the summer I like it to go to the lake and swim.
They will scold me. To say that all the forest. And you go and even at night. Wolves and bears. We must be careful. I do not care. I like to swim under the stars. Would you like to join me? I think it would be fun. And is not that big a deal. What would you like to show me? Tell me, Trevor.
Trevor I'm going to sleep now and look forward to your response. What is waiting for me and that you cook if I come to you. I so want to get your letter soon. How to do it, so we were able to communicate with you more than a day. Do you know how?
I'm waiting for an answer, Trevor, Can I call myself your friend?
Your friend Natalya

Emails from Natalia Broomkin to Jim (Canada)
Hello. Today we have a good day and I am in a good mood.
I hope you feel good too. Are you surprised? I hope this surprise will be a pleasant event for you.
My name is Kseniya. I am 29. Now in the 21st century online dating is quick and convenient.
You don't have to feel nervous to get a negative answer not like in a reality.
Now a lot of people try to find new friends in the internet for common interests, active rest and even for love.
I would like to find my man. If you search for only flirt or correspondence, our interests are different.
If you search for something serious we could try to learn each other better. Kseniya.

Jim i'm glad you said. I was waiting for your answer. I did not know what and how. But I hoped and believed that you will answer.
then you Jim? I write correctly? Well, of course correct. I read a few times before you write.
Jim i do not know where to start. I am 29 years old. I live in a small village. Sometimes go on business trips. But mostly, I live in my room. A small village Palauz in the Republic of Komi.
There are almost no one.
Previously, there was a shelter. For orphans. I was there. Learned and grown. Then he studied at the nurse. And then came back. Here a small point of care. I help all old teachers. Because apart from me there is no one here. Only some old men and women. And the summer come to them grandchildren. I'm bored here.
Friend here in the shop to put some sort
Read more