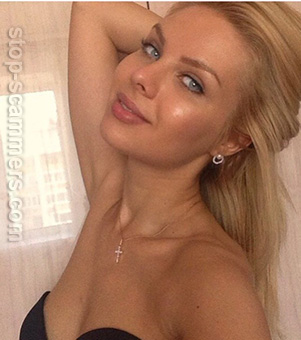 REPORT N1 (added on January, 7, 2016)
Dave (USA)
This woman made initial contact on a dating site that I had only visited briefly a few times in early August 2015. A couple of short messages were exchanged and she asked if she could contact me via email and asked for my email address, after giving me hers. I subsequently sent her a brief message and she returned with a very cordial, polite introduction in very good English. She introduced herself as Viktoria, and said that she was called Viki by her family and close friends. She sent a couple of nice, non suggestive photos of herself, and an exchange of emails began between us with just talk about various aspects of our lives, jobs, tastes in food, music, pastimes, etc. ie very casual, non suggestive, non prying, comments, questions and thoughts. She indicated that she was a University Graduate with a degree in Environmental Studies from the University of Lugansk, and had fled the conflict in the region in 2014, and was living with her aunt in Tarasha, near Kiev. After a few weeks of email correspondence we discussed talking by phone and texting, and she gave me her cell number and we began to talk and text, once or twice a day. These were very polite, brief conversation, she had very, very good English grammar and speech skills, and sounded as intelligent as she did in her emails. An a daily email exchange continued, occasionally with a new photo, none ever suggestive or revealing. They showed a very beautiful well maintained young woman. To put it plainly, I was very impressed, she was smart, educated and beautiful. At this point in our communications, she had asked me for nothing financially, had never inquired about my earnings or financial well being. She knew I had a regular job, that I had been in the U S military for a while, and very little else about my financial means. She told me about her job, which was as a business secretary for a construction company, and that she did not make much money at it. She said that eventually she would have like to work in her degree field in environmental resource management or a related area. Her degree of intelligence impressed me, very good English and educated. Red flags were not going up at this point.
Within a couple of weeks of phone conversations, there were discussions of her coming to the US for a visit, possibly in the fall. She indicated that she had a valid Ukrainian passport, and that she had briefly traveled in Europe in the past. We began to discuss plans for a potentials visit, and the possibility of her obtaining a US visitor B1 visa. She told me that she had been in contact with a travel agency in Tarascha, called Travel With Us. She readily gave me their email and phone contact info
Created: 2016-01-07    Last updated: 2016-01-07    Views: 1295