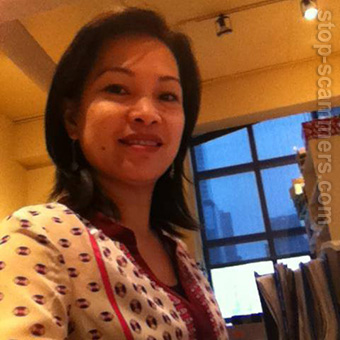 REPORT N1 (added on January, 11, 2016)
Wayne (Canada)
I am a victim of Ms. May Claire Luyun, who is a Filipina running a "Philippine Romance Scam" on the internet and "in person". I have reported to local police.
Ms. Luyun was ordered to pay $3,000.00 in Restitution at the Ontario Superior Court Action for Fraud on September 10, 2015, specifically the "Philippine Romance Scam",
In Canada, Ms. Luyun attempted a fraudulent marriage for Canadian citizenship, using myself and likely will seek a "husband" who can provide her with citizenship, he will be divorced and Ms. Luyun, will then move onto her next victim for a new fraud.
Ms. Luyun advised me personally that she suffers from a mental illness and was hospitalized for three (3) months, but failed to advise Immigration Canada, a Misrepresentation Immigration Canada is aware of her phony marriage schemes.
Ms. Luyun worked in the "underground economy", working for "cash jobs" and "being paid under the table". No taxes were paid in 2014-2105. Ms. Luyun was using the internet to scam men in a "Philippine Romance Scam" to supplement her cash income, to gain citizenship and even attempted to ********** herself in January 2015. Ms. Luyun may not pay any income tax in Canada for her several "cash jobs".
The purpose of my complaint is to attempt to gain restitution from Ms. Luyun's "Philippine Romance Scam" and to warn other all other men and the authorities about her fraudulent internet activities in Canada and in the United States.
Created: 2016-01-11    Last updated: 2016-01-11    Views: 2135