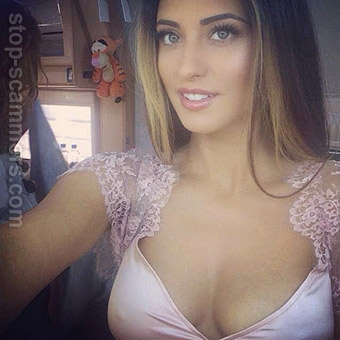 REPORT N1 (added on February, 16, 2016)
Bob (South Africa)
The Scammer is using the name Ashley Branson She claims to be an American from the Houston, Texas area, and was born in Chicago,Illinois on July 19,1979.She claims to have a daughter, Nicole, age 5, born in Houston ,Texas,on 14, November ,2010. She came to me on my Linked In Business (JANUARY 11, 2015) and asked to connect.
As the story goes, she was lured to South Africa, by a South African geologist named Scott Van Riebeck. He is in his 30's and is from Red Bud.
She fell in love and had Nicole, while he was on contract in Houston to Shell Oil. In 2013, they came to South Africa, where she brought her 8.5 million USD fortune she received after her fathers death in 2010.
Her business was set up in Sandton as AARA Commercial Properties PTY. She used 7.5 million to purchase 50 acres of land in Sandton for her project, a ZED Environmental and Energy friendly Apartment complex.
She used 1million for expenses but had the account in Scotts name because she was on a Visitor's Visa.(copy of Visa given) As it turned out, Scott was married with children. Once she learned this, she argued with Scott, and he tried to **** her and stole the 1 million leaving her stranded at the Holiday Inn, on Rivonia Road, in Sandton.
She furnished me with 2 passports, one US and one British. Also, she has given me a British drivers license. The pictures on the passports are of Antonia Iacobescue(US Passport), a Romainian Model and singer, and a Saudi Princess family name of Al Taweel( British Passport).The picture on the drivers license is unverified, and the number given on the Drivers license is wrong.The 2 Embassies or Consulates in Sandton, South Africa will not verify these documents with out written permission from Ashley.
She gave me a copy of her land sale, which is suspicious, and a Deposit Slip from ABSA Bank to Capitec Bank for the Sale of her land to a South African Real Estate Group.The Deposit slip was for 102,111,755 Rand. The Real Estate Group does not exist , and their phone number is not valid.
Neither Capitec Bank or ABSA will verify if the deposit slip is real.
To date, I have lost over 36,000 USD to Money Grams and Western Union, plus a Iphone I sent.
I have found a Private investigation company, named IRS Forensic Investigations, who claim they can find and prosecute her and others in the scam, based on south African Law. IRS was referred to me by the Embassies.
She claimed her love and even spoke to me by phone I sent many times, and before phone. I have seen her via Face Time. I believe the person I have spoken to and seen is also a fraud. There are 8 women who pick up the money, and I have their names.
The money was sent for daughters hospital bills, help her pay expenses, and to set up various accounts to get money back to US.
When I get on my feet, I plan to use IRS to find her and prosecute under South African Law.
She is currently using an address in South Africa, near hotel for the delivery of another Iphone. The address is Soho Lofts, Soho lane,Apt.73, William Nicole Drive,Sandton, Guetang,South Africa 2196. The lady's name is Mrs. Kayode Olufemi, and works reception at Holiday Inn, where Ashley is reportedly staying. A woman named Mrs. Olufemi called me, and she sounded South African, white, not black. Ashley is supposed to be there to pick up phone and a Miss Piggy for Nicole via Mrs. Olufemi.
As for this scam, it is the best I have ever seen. I have been scammed before, and caught it, but not this time.

I appreciate your response and i hope all is well with you I have a 4 yrs old daughter and i have never been married before i am also at the point of finding a nice man to fall in love with to spend the rest of my life together with him business keep me busy and i am currently live in Sandton,South Africa and i travel back to the state on business basis my daughter lives with me here and we're happy together I will like to find a nice man who is down to earth sincere and honest he must be ready to tolerate me and my daughter here are more about my personality interests and hobbies

Personality: I am an open minded woman serenity, love, caring and understanding trustful & down to Earth I am straight I like to play chess, music listening,travel, food, love, participation in
live-jazz-concert I like reading, poetry, novels, art, hardworking and business Oriented favorites: Thai food, French toast, and white wine favorite color:Pink Age is nothing but a number I am 36 years old I hope age is not a problem , understanding, caring, respect, and honesty are the things that matters in a relationship do you agree?

I have black hair i am a Caucasian(white) blue-green eyes with a good sense of humor, I do not smoke but drink Occasionally I'm a Christian I like dining, watching sports, outdoor activities, reading, computer-Internet