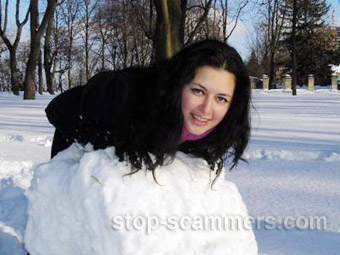 REPORT N1 (added on June, 25, 2005)
Don (USA)
Hi, a lady from Russia wrote me under one name and email address and sent her pictures. Her name is Veronica. About a month later a girl from Russia wrote under the name of Marina and a different email address
as the other one but the pictures were the same for both. Neither had gotten to the point of asking for money but when I got two different names and email addresses with the same picture I knew something was fishy there. I wrote each one back and included the letters and pictures from the other name and haven't heard from them since. Obviously to me it was the beginning of a scam but she messed up with the pictures. Thanks.

Romance scam letter(s) from Veronica to Don (USA)
Hello!!!
I am glad, that today I have received news from you, thanks you, that have written to me and have sent the photo. The truth I never in the life communicated with the person who does not live in Russia, and talks on I native language. But I well understand everything, that you write to me. When I went to school, and then at university I had very good teachers on English language and consequently I can read your letters without assistance and write to you. I hope, you understand, everything, that I write to you. And if you will really understand my letters, means, I am good for learning English language. :) I studied in Balakovo the state university, on a speciality the bookkeeper. And after ending studies I to be arranged to work as the bookkeeper in one of firms of our city. The firm in which I to work is engaged in sale of the economic goods.
As we only we get acquainted, I should tell about myself as much as possible. Also as well as me it is necessary learn about you as much as possible. I was born on June, 25th, 1977. My growth of 170 (5,7) centimeters, weight 53 (120 lbs) kgs. I live with my mum. I very much like walks on fresh air, I very much love the nature. I like the sea and is pleasant to float, in the summer I like to float and sunbathe. I float and I sunbathe, on coast of lakes not so it is a lot of as though to me would be desirable, because a lot of time leaves for work.
I love a life - I am an optimist, and I believe, that the
Read more