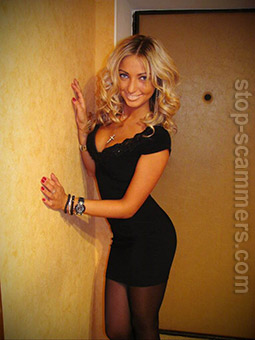 REPORT N1 (added on March, 11, 2016)
Shea (USA)
I searched the first few lines from her first letter to me and your website popped up with, not only the first letter she sent(with the names changed), but with the whole series of emails I received...at least parts of the first six or seven.

Emails from Olga Nikolaevna Nekhoroshko to Shea (USA)
I have a smile from that that I see your letter it pleasantly for me it means that we are similar in our searches. Shea as I already spoke my name Olga. I not married also have no children. I live in the city of Izhevsk. I always considered myself cheerful and cheerful in the center of attention because I work with children. For me it is pleasant to communicate with people at me many friends and colleagues. But so it has turned out that this active life I have not found the love in all. On it I here. Shea, I would like to know why you here? What reasons at you? You are lonely? Shea at first sight people not always such with what seem, many know me cheerful and active all this from that that I often smile, respond on their requests I participate in many actions. I conduct a vigorous way of life. But only when I come into an apartment it is empty and cold, to lay down in a cold pastel and to fall asleep only with one idea that have come tomorrow and I had new day. Before me it did not worry, but in due course I became more adult and have started to reflect more increasing every day about it. I wish to find the person which will understand me in everything, and I shall have understanding to it. Shea, washing the soul is tired from melancholy, I hope to that that dialogue through Internet that that will change. I send you my picture so that you can see what I look like. Shea, I hope, that I was not sad in this letter and it to like you. Your new frie
Read more