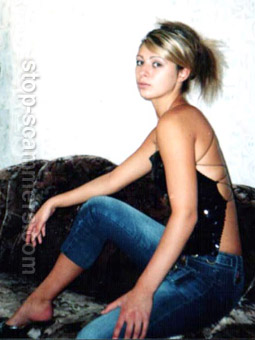 REPORT N1 (added on June, 25, 2005)
Kurt (USA)
I meet Irina on the Absoulte Agency web-site. We made plans to meet in Jamaica. I sent her money and she then sne sent me an e-mail telling me she was sorry but we was scamming me!

Emails from Irina Zoudina to Kurt (USA)
My dear Kurt,
I want to begin this letter telling you, that you are really seldom noble man, so caring, loving and tender. So I really think. I want to tell you the story. Please read it carefully and till the very end, ok? There was a family, just normal Russian family - husband and wife and two children. For a first, maybe there was a love, maybe he liked her for her style, beauty and... money, now is not clear. After one year life together she as young and healthy woman got pregnaunt. And when the stork brought a little beautiful creature, the same stork steel the husband. He was also young and handsome - women like him a lot, later lucky in business, earning good money. She also had very smart head and was in time to make her home and successful business too. They got another baby, she hoped for the best and was happy. The family could be just perfect! But maybe money took his head away - he start to spend night out of the home, taking no care about the children as well as about the woman. After some time she found out that he spends his time in saunas and casinos with girls, ***** and cards. She was a wise woman and did hope that there is still a chance for them and for their family. But it got just worse and worse. SHe decided to stop the relationships once, he told that he wouldn't do that anymore and so on, she belived to him........ and so happend for several times. Last spring for Easter she got to know that she is pregnat again. She would never
Read more