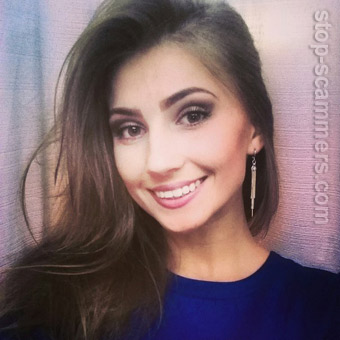 REPORT N1 (added on August, 31, 2021)
John (USA)
This girl is Olesya Predrasnaia and is from a small city in the Eastern Ukraine. She was another girl from a dating site that emailed me. I did ask which site she was from but she could not recall as she was on a few of them. I too was on too many to know if I gave her my email address. We emailed each other, sent many photos and I began calling her on her phone a few days a week. I had an international account that was not expensive so I called her often. I offered to visit her, but she said her city was very small and boring. I looked it up and it was just a small boring town. It was advised to me by my travel agent not to go there as it was not safe due to the Russian conflict and possible civil war. I thought maybe we could met in another place. She sent me a couple suspicious photos that did not look like the others and she was upset when I mentioned it. She became defensive and hung up the phone a couple times because I said she was a possible scammer. After a few days we spoke again and she sent me a **** photo of her in a bikini. I wrote her a nice letter about my travels to Mexico and told her if she wanted I would take her there. She wrote back and sent me a phony invoice for a $3000 trip to Barbados. The travel agency was listed so I called the number and there was no answer. The agency name did have a website but with a different address and phone number from the agency in her own city! I did not write back but have all her photos and the fake travel invoice. I also have a passport scan which I am sure is fake. I know it is very easy to fake a passport in the Ukraine. So Olesya, I know you are a scammer. Luckily I did fall for your schemes. Beware guys she is **** and very smart.

Emails from Olesya Yarsenich to John (USA)
Joe, I'm so glad to hear from you:) I'm Olesia from the dating website. I'm glad that you came back to me:) I'd like to find out what your hobbies are and what your position in life is. I am very lucky person because I have my job as a hobby. I'm a nutritionist and I'm absolutely fond of it. Moreover, it has already become a lifestyle for me. If you dont share my interests, it's not that important. The most important thing for me is to be sure that we are the right people for each other. I'm very positive and talkative, I like to attract positive moments and people into my life! I'm pretty sure that i's not just occcasionally if we came accross each other:) I have such an inner voice which tells me that:) Hope to hear from you soon and find out more about you:)

Hi John! Sorry I've made a mistake typing you name. It was just a misprint. I am a real person, and I'm looking for a serious relations online. I'm not interested in asking you for money. I just want to find somebody for a serious relations from abroad, as Ukrainian men don't appreciate family life, all they care for is going out with friends for a drink. And my goal here is to find a partner for a lifetime who will make me happy. Kind regards, Olesya.

Hi John!
I saw your profile and had a premonition that this person is mine. You know what I mean, you get such a feeling when talking to somebody and having the very first posi
Read more