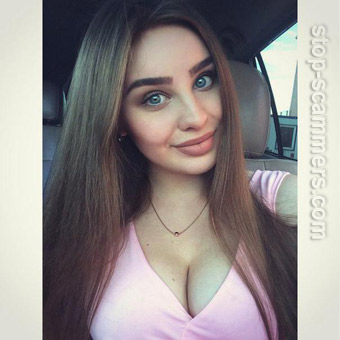 REPORT N1 (added on April, 26, 2016)
John (USA)
Liza is a young 27 year old woman is from Lviv, Ukraine. We met me through a "friend" on a dating site I was registered on. The girl contacted me through my email and we began corresponding by letters and starting talking on the phone nearly every day for a month. We talked about meeting and she said she was falling in love with me. I began to search for her on all the scam alert sites, Facebook and VK.com and couldn't find anything on her. I asked for photos with her family and a picture of her as a young child. She sent it to me and I received 40 photos, including a picture of her passport photo. I wanted to go to Kiev to visit but she wanted to see America and I agreed to help. We continued to talk on the phone and had one Skype meeting with video at her place of employment. It was a day her boss was out of the office she said and it was the only time we did it. Her camera was blurry, mine was not and we could hear each other very well. Her phone service was terrible and calls dropped on a daily basis. I told her to get a visa and invited her to stay with me for 3 months. I offered a cruise to Mexico or a Florida vacation soon after she arrived and she sound sincere and excited. When the week came for her to travel she had to go to Kiev via train, rent an apartment and purchase airfare. I agreed to pay for a one way ticket, but she insisted on a return ticked as well. She said she would borrow the money from family and friends for her trip. When her documents were finally issued she went to Kiev, and called me crying about the traveling money. She said the embassy called her to remind her to bring funds for traveling to the US as customs may request to see it. I would not send her more money through Western Union so she returned home upset about the whole ordeal. We spoke a couple days later about me coming to Kiev. Like a fool, I said maybe the trip to New Orleans from Kiev is a better idea since it is cheaper and you can visit now. I had to wait 8 more weeks until mid June before I can take vacation time at work due to pending projects. I bought her the round trip tickets from Valva travel on line for 965.00 and she returned back to Kiev via train. I received a call from her this time she was crying and said her friend did not come to give her 200.00 for her trip to Kiev. She said she used the 500.00 for traveler's checks and could not spend it. I asked her how much she needed and she said 265.00 which I sent once again with Western Union. The next morning her flight was to leave at 7am and I called Air France to see if she boarded. I was going to cancel the tickets if she did not, but was told she did in fact board the plane. I went to sleep finally revealed my Russian princess was coming to visit me. Unfortunately, I awoke to an urgent email again from Liza in trouble and needing cash. This time she was stuck in a hotel room with damages due to an overflowing bathtub. The room damages were 550.00. I was stunned and had read about this scam on blogs and knew I was she was a professional scammer. Her voice was sweet and convincing. Her writing was always in response to my letters. She was very good and I was naIve to think she had to nerve to travel alone to the U.S. In the end I lost nearly 1800.00 not including the money I spent on phone calls to her. I wrote a scathing letter about her lies and deception and she return a letter saying I betrayed her and left her stranding in a foreign city. This is the work of a professional. I think I am on a scammers email list because I caught a few others quickly. This girl however I did not catch until it was too late. I will write to the American Embassy in Kiev to see if she can be found. I doubt anything will come of it.

Emails from Elizaveta Perkova to John (USA)
Hello, dear John!
I am pleased to write you a letter and I am glad to show interest to you :)
Of course, I just want you all telling about me and about my life and find out all about you, but we will do it gradually, right? )
I live in Ukraine, in the wonderful city of Lviv, the city is famous for the fact that the city has the highest number of monuments in Ukraine. Tell me more about your city and country that is the most special there?
As you already know, I have this exact purpose of our communication as you are, I need a family.
I have never been married and don`t have children, I'm a serious girl and I want to build my family with a decent man. I'm ready to be a great wife, a good friend and an ardent lover and all of this for only one man. I never frighten the difficulties in life, I know that I can cope with any difficult situations in my life and it would be doubly pleased if I had to cope with the difficulties with the beloved.
I never tried to look for the ideal relationship, because in fact they are not. There are only two hearts, two persons and two souls are reunited, can change life in the best way and will change the lives of others. My life will have meaning only if I can make at least one person on earth happy. You want the same?
Please forgive my poor English, I am now at the stage of learning the language, but I can freely write and speak English :)
I am happy that we began our dialogue and really want to see in the f
Read more