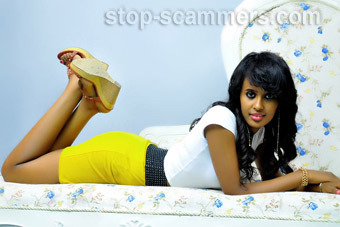 Emails from Faith Abdel to John (USA)
Hello My dearest,
Firstly I thank you so much, inline with the message, which I have sent to you, I am more than happy in your reply to my mail. How is every thing over there in your country, i believe that you are in good health and the atmosphere over there in your country is very nice today? Mine is a little bit warm over here in Tambacounda Senegal.
My Name is (FAITH Abdel) From Libya in North Africa, i am 23 years old but age doesn't matter in a real relationship, I am from (Libya,) 5.2ft tall, fair in complexion single,(never married ) and presently i am residing here in Tambacounda as a result of the war that happened in my country which i was escaped to this country Senegal were i am under (Alliance missionary home). My late father MAJOR GENERAL, (ABDEL FATTAH YOUNES ). My late father He held the rank of Major General and the post of Minister of Interior, but resigned on 22nd February 2011 to defect the rebels in Libyan civil war. My father was killed by members of an anti-Gaddafi military on 28th July 2011. When rebels anti-Gaddafi military troupe attacked our house one early morning killing my parents , now you see i loss my lovely and beautiful mother that love me, it's only me that is alive now, due to i have already gone to school before the rebels attack our house, I managed to make my way out with the help of UN to Senegal where they called Alliance missionary home right now, as i am talking to you, i am in country called (Senega
Read more