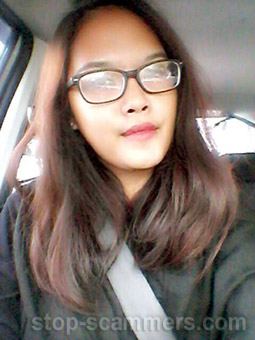 REPORT N1 (added on June, 16, 2016)
Pavel (Russia)
Hello !
I would like to warn everyone.
Nina Anindita Risty from Indonesia, born 20.05.1994, is a scammer.
She contacted me via Facebook (she's friend of my friend who I know in real life). One day she asked me to lend her money because she's got sick and lost her documents and that she lost her mother due to cancer. I imagined myself in her situation and I felt pain in my heart. She lost her documents so she asked me to send money to his friend. That worried me, but I still felt sad about this woman. I sent money with Western Union. After several days she asked for money again. She tried to call me. She swore with Allah that she's dying and she needs medical help which is expensive so she needs money again. She sent me vocal messages in Facebook with moans. Also she said that she needs to go to hospital, but cant afford room in hospital so she asked me to pay hotel room just near hospital because she lives too far from it and its difficult to come there. I asked her to send documents about her health conditions, but she always had an excuse (today its too rainy, oh i was too busy, oh internet is too slow,etc). I sent first payment in February. And I still have no evidence that she's sick and she spent my money on her health. I tried to contact her Facebook friends. But they almost immediately block me and notify Nina that I contacted them. Nina told me not to annoy her friends with my messages. She promised and swore to Allah that she'll send me her health documents and money back, but now she blocked me. So I finally decided that she's a scammer.
Created: 2016-06-16    Last updated: 2016-06-16    Views: 1310