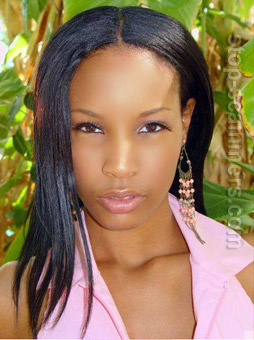 REPORT N1 (added on July, 1, 2005)
R River (USA)
She contacted me by sending a "wink" through Interracial Match on 5-26-05. We talked on the site messenger then on her Yahoo messenger where she stated that she was planning to return to the USA during the upcoming
weekend. By 6-2-05 she stated that she was going to come to stay with me rather than to return to NY. On 6-3-05 she stated that she was short $400 for her plane ticket and was not sure she would be able to make it by that
particular weekend. On 6-4-05 she got around to asking for the money. I was playing the poor,dumb redneck and couldnt afford to send any money.
After about 45 min, she asked me to cash a money order from her 'uncle' and send the money via Western Union. I still played dumb, so the next afternoon, she asked for $200 to buy some outfits for a modeling tryout.
She was not pleased with my response that I had a cousin that was handy with a sewing machine and if she could send pics of the outfits she needed, I could have my cousin whip them up for free. On 6-6-05, I was getting bored with the whole thing and I agreed to cash the money order for her. I tried to get her to send $40 cash, American, with the money order so I could pay for the gas to get to the nearest Western Union office, but she wouldn't bite on that. She was supposed to have sent the
money order on 6-21-05 but she never really said that it had been sent. In a conversation on 6-25-05 she implied it had been sent. Havent heard a word since. However, on 6-8-05, just for the **** of it, I contacted her with another ID to see if she would use the same scam.
She did. With ID#2 I played that i was well off and offered to just buy the ticket and have it waiting at the airport for her. That put her in a panic. She said she had to buy the ticket herself through the travel agent there or the immigration officers would interrogate her.Then I told
her that before I bought her ticket, I would have to have **** pictures of her to insure that she was serious. That caused anouther panic because now she had to find **** pics of the model she has been using. Talked to her a
couple times after that with ID#2 and kept reminding her that I needed the **** pics before I would send money... Keep in mind, she has been talking to both of my IDs at the same time(sometimes at the EXACT SAME TIME)
promising to come live with both of them. Havent heard from her with either ID since 6-25-05
Pics she is using are of model Tanya Desiya
REPORT N2 (added on August, 26, 2005)
James (USA)
First IM's me through American Singles. 07/06/05 then moved over to yahoo. She does have a Yahoo and American Singles profiles with the same Photo as Teresa Lucas in Stop Scammer Website.
When she started talking about sending money I got real evasive. She is still IM'ing me but I just play along now.
Just thought I would pass this information on.Very little e-mail traffic except to send requested photos.

Emails from Teresa Lucas to James (USA)
my love this is my pic ok.

hello James ,
i hope u love this rigth?

Though miles may lie between us, we're never far apart, for friendship doesn't count the miles, it's measured by the heart,i love u soo much.

Dear James,
Thanks for ur mail,i really understand all u have said and think u are rigth about being aware of those who fail there promise.Dear, i will be welling that u tell me what u want me to do and also if any thing else u mail me and let me know ok,but for a web cam,i dont have one to even show my body and othere things for if posible,i can give u a number so that u call me and talk much,pls will be welling to hear from u Rasheeda.

To love someone is to understand each other, to laugh together, to smile with your heart and to trust one another. One important thing is to let each other go if you can't do this.