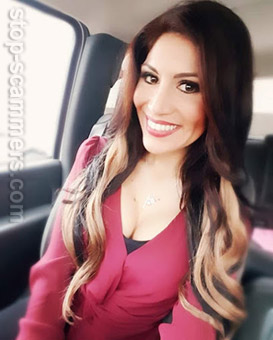 REPORT N1 (added on July, 5, 2016)
John (USA)
On the 28th of June I was contacted on Badoo by someone purporting to be Erica Welbeck aged 31 years. I replied and he/she told me that she was single and living in Ghana, her parents had died and she lived with her Uncle, Micheal Ako Okia. He/She quickly began to send photos and telling me that she loved me and wanted to be with me, she also told me that she was a ******, she then told me that it was her birthday on the 30th of June and asked me to send her money to buy a cake and have a party with her friends. She asked me to go to Hangouts and chat with her there which I did and I then asked for her email address which is ericawelbeck@gmail.com Over the next couple of days and during our chats I asked her to video call me and received a message from Google saying that they were unable to complete the call. I later video called her and was met by a blank screen and a man at the other end purporting to be her and speaking in a squeaky voice, He/she told me that the cam recorder was broken.
She made several requests for me to send cash and gave me the address to send it by moneygram to; Micheal Ako Okia Country, Ghana, City Accra, zip code 00233 I have records of all conversations, copies of all photos, copies of her Badoo profile which states that she lives in California with her parents (she previously told me they were desceased). She also told me that she only had a computer but her Badoo info says she works from a mobile phone.
I am still conversing with him/her should there be any other information that yourselves want me to try to get.
I have searched your databank and can find no trace of either of these names, no photos of her either.
Created: 2016-07-05    Last updated: 2021-03-18    Views: 1477