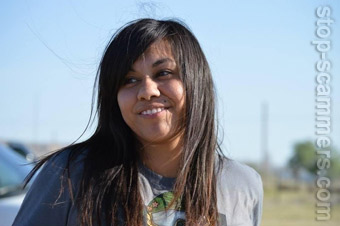 REPORT N1 (added on August, 11, 2016)
John (Brazil)
This morning I was contacted via a dating site called Webdates by a woman claiming to be Chelsea Albert serving with The British Army in Syria. She claimed to be looking for romance and also someone to help her get 3.4. Million Dollars out of Syria.
Searches revealed that she is very active with this same scam globally, she is also on romance sites in Arab and Asian countries.

Emails from Chelsea Albert to John (Brazil)
Hello my good friend
I appreciate your response to my mail and I look forward to establish a trusted friendship with you. I am Sergeant Chelsea Albert, from Northern Ireland. I am a British Army medic, I joined the Royal Army Medical Corps in September 2007. My first six-month tour was at Iraq in 2008 and I qualified as a Class One medic, I have also received a Military Cross award 2011 in recognition of my gallantry in Afghanistan.

Presently, I am stationed in Syria as a combat medic and I am working with the US troop in Syria. My second mission is Syria ,and I will be here for 6 months, Although I have already spent 4 months and I hoping to complete my mission in 2 months time. Talking about myself, I am 27 years old, single and I have no kids. I am not in any relationship now but I am not in a hurry to start one until I find that right man who will truly love me from his heart not be scared about my job, Most of all I would like him to be faithful, and truthful. I don’t appreciate betrayal and lies and I will also love him in return.

Actually, I contacted you to discuss about investment in your country and I want to know your opinion. I have some money worth $3.4 million USD and I wish to invest it in your country but I need you to help me accomplish this plan. I know you will be surprised to receive this message from me because we haven't met each other, However It's a matter of trust and necessity that moved me to contact you and I al
Read more