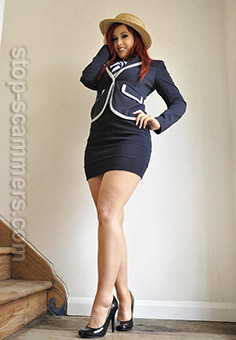 REPORT N1 (added on August, 24, 2016)
John (Brazil)
This report deals with Therezer Smith I was first contacted by Therezer Smith on the 15th August 2016 via Badoo.
She told me that her parents were dead and she was living with her Uncle in Ghana, she went on to say that she was 35 years old, single and a ******. We agreed to exchange messages by whatsapp and gmail.
She began to send me stolen photos of **** star Josie Raye, this **** star also uses other names which will be attached later. Therezer Smith also sent me a photocopy of her forged USA Passport, expired. Our conversations went on for several days and there are 27 pages of these conversations, mostly irrelevant stuff. I have put the important sentences in bold lettering. There are also many photos that she sent me.
She goes on to tell me the usual, ie age doesn't matter, she loves me, asks for money via Western Union or Moneygram and gives her address and phone number.
A mirror image search shows that the person in the photos is probably one Willison Mercy who had a page in Twitter some years ago, this page has now been deleted. Willison Mercy also has a facebook page which will be attached later.
Sorry this report is rather complicated, but I believe that the info which will follow will be straightforward.
Created: 2016-08-24    Last updated: 2021-05-20    Views: 1578