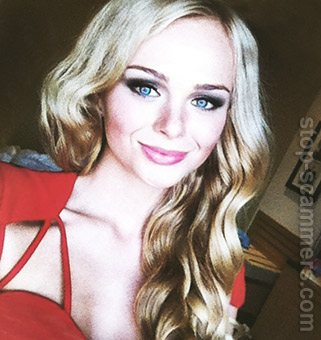 REPORT N1 (added on August, 30, 2016)
Johan (Sweden)
Valentina Lisak named person applied for a partner Fdating site. She wrote with 2.5 months letters to me. She wanted money for the passport, medical report, police report, etc. I sent her ? 1,700 via Western Union. I bought airline tickets through eBookers. She told me that she could'n go through of the control point in Artemsk because of the tickets. She has to buy tickets for herself and therefore need to send money. She sent a copy of her passport, PrivatBank's certificate that the Master Card belongs to her, whose owner was revealed by another person. She said that she had bought a smartphone which camera was broken. She had two phone numbers that she almost never answered. She refused to send a copy of Visa to. Photos stolen from Miss Intercontinental 2013.
REPORT N2 (added on September, 2, 2016)
Silvio (Australia)
Yes the lovely Valentina has asked me for money passport and visa.I sent her $500 for her passport.Then she told me it was a $1000 for her visa. I did some checking and found her on this site doing the same scam to another gentleman from Sweden.She doesn't want you to buy her plane ticket online because she claims there are many bogus online ticket scams and its best to send her the money so she can buy the ticket herself. She is a scamming little *****!!!!
She writes the most beautiful letters with wonderful sweet words to melt your heart. She works in the home for the elderly and does volunteer work in orphanages. She makes you believe she is a gift from heaven but she only wants the money!!
I think we as men have to realize any of these glamorous women for Ukraine and Russian claiming they can't find a man is ********!Most of these women have boyfriends and are fake!
Good luck everyone and hold onto your money!

Emails from Valentina Lisak to Silvio (Australia)
Hello my dear Silvio) Thank you for the letter. I have been to the office and they said that a passport is done in two weeks and the official cost of it is around 45 dollars or so. In a month it costs 35v dollars. But this is the official cost at the Migration service.
Of course I can go there myself and do it in Kiev, but I need to take the bus there, stay a night in the hotel, go back to Lugansk, then come back for the passport in two weeks because the post doesn't work in my region. Also I would need to cross many control points and block stations. I would need to bribe almost at every point because as I have been told they do not easily let anyone out unless you have cash on you. What a wonderful corrupted region I live in. Of course the office knows about all the difficulties of getting to Kiev and they charge a fee of 250 euoros for the passport. It is the same cost as if I was going to Kiev and applying for the passport myself. They have some kind of channels that make all the documents for them. It is all legal and they have the License and all of this. I said that I will think about it of course and now I am informing you about it. I want to tell you that not only are our letters full of love but I can always feel the love when I read the letters from you. You make me feel happy Silvio, you make me want to dream and live again. Before, I used to just exist but now I want to live. My leg is still hurting but I am doing fine. The doctor a
Read more