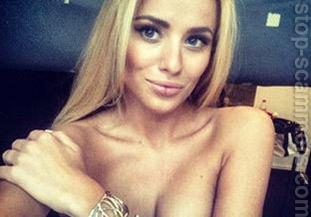 REPORT N1 (added on September, 23, 2016)
Richard (Canada)
I first initiated contact in June 2016 on the dating site Zoosk. She replied that she wanted to communicate via email as she was cancelling her subscription to Zoosk. After a couple of emails or so there was a pause in our communication as she stated she was going out of town for work and would not have access to the internet. About 6 weeks later we began emailing each other again on a regular basis. I first mentioned the idea of meeting at some point but nothing definite. Shortly thereafter, however, she stated she was able to get some vacation time and wanted to meet. She asked me whether it would be better for her to come to Canada or for me to go to Russia; I stated it would be better for her to come to Canada. A little while later she told me that the cost of the trip was more than she could afford and, because we both wanted to meet, she requested I pay half of the costs. (flight, visa, insurance) The amount she was asking for $835. After some hesitation I agreed expecting to pay her upon her arrival. However, when she asked for the money upfront I became suspicious and started to research her travel agency etc. I asked her to prove her identity by taking a photo of a current newspaper/magazine and her passport, which she provided. During this time I came across another website revealing that one of my emails was the same as someone else's which eventually led me to your site. At that time I told her I knew she was a fraud and that I wouldn't give her any money; we ceased communicating at that time.

Romance scam letter(s) from Alina Viatkina to Richard (Canada)
This Alina from website dating, just to check if it works.
You wrote me your email on the web dating site, I will wait for the letter. :)

I wrote you a letter and I hope you will answer my letter as soon as possible. I do not want our relationship has ended on this, do not even begun. I want to continue to communicate with you. I look forward to your reply.

Hello Richard. You answered me and made my day! It’s like a first conversation, our first dialog. In some ways it’s much more easier to write - you must agree with it or what are you doing here :) here I can be myself. Thank you for such fine compliments, I'm flattered ... I blushed :) I never received more compliments from men Fine! You are incredibly kind and sincere person I like to read your letters, I read them several times ... how I want you to be right now there! I think that relations should be based on honesty and trust. I will try to be as open and honest in our communication. I would like to find a serious relationship, not just a friendly conversation or to have fun. this I will not waste your time in vain and if I am writing to you then I have interest to you. All my photos I made in Russia! :)

as I said, I took my friend's profile on a dating site. if I could change my information I would have done it. I'm not going to cheat you in my first letter explained told my location. I like active sports and nature trips
Read more