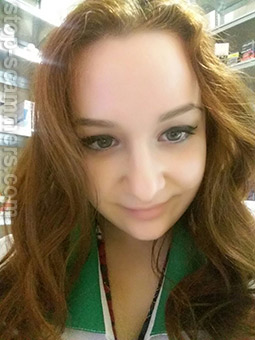 REPORT N1 (added on September, 29, 2016)
John (Brazil)
Is registered at ok cupid as Olga Beautiful, she has two facebook profiles, one in the name of Katerina Shipilina and another in the name of Katerina Katerina.
In our mails you will see that she says she has a sister named Katerina yet all pictures in the facebook accounts are of Olga. I do not believe that Olga exists, only Katerina.
She contacted me via ok cupid and told me that she and her sister had separated by the Ukraine/Russian war, she was in the Ukraine whilst her parents were in Russia, within a day she loved me and wanted to come to me but had no money, I argued this with her telling her that I was too old for her and she said that age didn't matter, she loved me.
I asked her to prove her love with some **** photos and this she was unable to do because her phone was broken.
She asked me to send her $300.00 to buy a new one and then she would send me photos.
She later denied this until I copied her text and sent it to her. I can find no other trace of her in internet searches.
REPORT N2 (added on December, 22, 2016)
Hermon (USA)
I randomly selected a 22-yr old on Facebook to chat. Over two months she and I became chatting friends and communicated frequently.
She state that she was a pharmacist and that her sister Irina an economist.
She said she made $5 a day. I offered to subsidize her wages and begin sending amounts of around $250. When she reported that she was laid off I increased the monthly allotment to $300. When she said her roommate moved out I increased it to $350. She sent me may photos even as I asked at that moment. I believe she sent me real-time photos (for ex: waking up in the morning). I admired her greatly. We had intelligent discussions. I really was convinced that she was a real human being.
We expressed friendship for each other. However, when I would ask for proofs she hesitated. Demanding proofs she finally sent me her driver's license which I can upload. She also sent me a photo of her passport which I can upload.
There is much more to this scam which I just discovered who she is by finding her sam photo on this website. Now I am convinced that I have been scammed.

Emails from Olga Shipilina to John (Brazil)
Okay dear.
My name is Olga Shipilina. I'm from Ukriana. I was born in the city of Donetsk. But because of the war I moved to Kiev (capital of Ukraine), but due to the fact that life in the capital is very expensive, I moved to Nikolaev. Now I live in Nikolaev with my sister. her name is Katerina.
The last 2 years have been just awful for me. my sister and I were homeless because bandits killed my house. well, that there are such people as volunteers. These people saved my family.
My parents went to Russia to work. and my sister and I live in Ukraine.
earlier it was easier to talk to my parents, but now the situation is very bad. we can not visit each other. all paths are blocked. we can only talk on the phone.
My job is pharmacist. I graduated from college. but not graduated from university (last 2 course, the war began).
my sister is an economist.
we live with my sister, rent small apartment.
we are happy that we are alive.