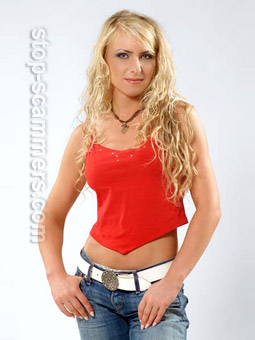 REPORT N1 (added on July, 12, 2005)
R.A. de J. (Holland)
Dear Sir,
I want to report a scam.
Found this lady on American Singles and EastWeastMatch, is now (July 2005) also to be seen on another site (forgot the name).
The lady did not ask me for money, because I visited her in Novosibirsk in the summer of 2004, but she did not mind spending my money, she took her younger sister (?) often with us.
I had arranged an apartment myself and she asked me for the telephone number of the owner, to check the apartment.
She insulted the owner such, the owner did not want to rent it anymore to me, Olga seemed to be intoxicated when calling her.
I had to take an apartment from a “friend”, more expensive as the first one.
I also missed some money, so………….
She drinks like ****.
Wants an easy life in the west, does not want to work, domestic or paid and want to spend the days on the couch, calling friends, watching TV, drinking ****, spending your money.
Is a hairdresser by profession, has one younger sister.
Speaks limited English.
She is indeed a beautiful woman, will send you after a while some soft ****** pictures.
She really lives in Novosibirsk, she new a lot of people in the neighbourhood from the apartment.
Created: 2005-07-12    Last updated: 2006-07-14    Views: 1303