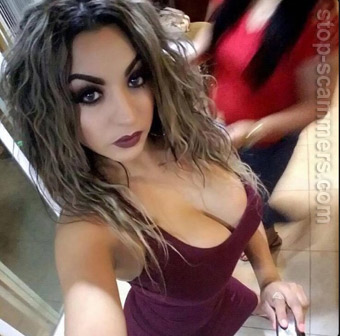 REPORT N1 (added on October, 11, 2016)
John (Brazil)
This report deals with Alicia Lara who contacted me via Okcupid a couple of days ago, after two or three messages she warned me that she would be asking for Money. In her profile which has a **** stars picture, she tells me she is in Nigeria and has an untold fortune at her disposal, $3.5 million to be exact. We moved from Okcupid to gmail. She began sending me photos of **** star Niki Skyler, decent pictures of which I could find no trace. We conversed and she asked me to send her cash via WU or moneygram. Have a look at this ones motif on her gmail address, LOl.
REPORT N2 (added on November, 30, 2016)
Sophia (USA)
This woman emailed me thru gmail and i didnt know how she got my email. She talked to me and my husband but i never believe her or trust her. She told me she have inherited about $3.5 million from her dad that passed away.. However she always ask us to send her money thru via wu and moneygram. And she has a friend sent us money from thailand.
REPORT N3 (added on December, 29, 2016)
Josimar (USA)
We never met this woman nor know who that person. She emailed me thru google and i never know how she got our email. We has our suspected first time but she claimed that she is real and not scammer. She manipulated us. She has us received and send money to person named jooda habeeb babatunde i asked her why not under your name. She said because she doesnt have id or proof. It was sent Nigeria then benin. She asked to wrote out as babatunde habeeb jooda then habeeb jooda babatunde in benin. It became red flag and we stopped and research about nigerian scam. Im glad we blocked her a d report her. Never fall trap ever again. Learned lesson.

Emails from Alicia Lara to John (Brazil)
I am originally from Florida City United States with a total sum of $3.5m with all the money I've gotten from my Dad's contract and contracts renumeration. Because the white man told me of an idea to invest in Oil firms here. When I got here, he made all possibles means to get the money from me and get away with my money. Then when I noticed this, for me to be more safe and secure, I put this money in a travelling luggages and locked it up with a security code known to me only and i deposited it with a Insurance Security/Freith Company here in West Africa Nigeria in order to safe myself and my assets. Thereafter I left the man's apartment to an hotel where I am in right now and from which I am communicating with you now.