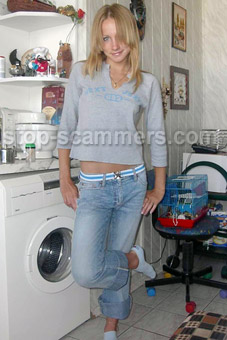 REPORT N1 (added on July, 12, 2005)
Patrick (USA)
This person uses same pre written letters as are found on your site. She (?) was immediately in "love" with me after the second or third email, She claimed that she had some vacation time and would use it to come to the states to visit me, claimed that she didn't have enough funds to do so. All was fine until I asked for a photo of her holding up a paper with my name written on it, then she (?) became extremely hurt by my "mistrust" and cut off communication. I was born at night, but not LAST night.

Emails from Alena Timonina to Patrick (USA)
Hello Coy
I am very glad that you have written to me. To me very pleasantly that on me you have paid attention.
My name is Alena. I was born and have grown in a small small town with name Yoshkar-Ola. I was born on febrary,7 1977. To me of 28 years. My parents educated me excellent education. I have finished comprehensive school ?24 which to be at me in a court yard.
In a consequence I have got acquainted with the person who has suggested me to work in modelling business. Not such big as it would be desirable for earnings, but money superfluous are never. I could earn to myself on higher education. Now at thinking two higher educations on a speciality of economy and psychology. Economic education at me in connection with anti-recessionary position of the enterprises. But also I passed special rates on improvement of professional skill - Book keeping and audit, and also economic. I have received education on economy in a degree of the master. And educations on psychology in a degree of the expert.
I think myself the good expert.
I have finished modelling school when to me there were 20 years.
On an extent of all this time worked in a private concern as the group economist. And also earned additionally as the psychoanalyst. But as this trade is at us not claimed I have stopped to be engaged in this activity.
In 23 years has opened the shop, on means earned by own work. Shop of food stuffs, in a consequence more powerful competitors have appeared, ther
Read more