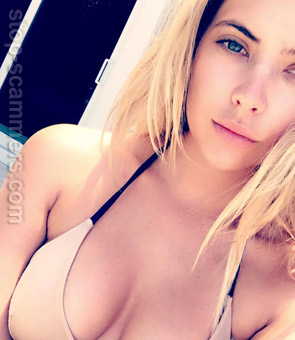 REPORT N1 (added on October, 14, 2016)
Jonathan (USA)
This is the big one! Racheal Kathy Smith contacted me from MATE1 un 10/5/2016. She claimed to be a photography and fashion model who traveled so much she felt it necessary to ask if that would be a problem in lonely her third email. The most curious item was her insistence that I obtain What'sApp or she refused to chat.The first sign I identified that indicated she was a scammer was when she typed, "I am from Oklahoma Tulsa. No one from the states EVER would put the state before the city, EVER. From the beginning, she acted as if she believed her credibility was unassailable even as she continued to make elementary mistake after mistake. Another factor was that she sent MP4 Videos, in fact FOUR(4)!! The first is what she says is her being picked up at the airport in Italy, the second a ****** photo shoot the third is a novelty special effect, and forth finally her attempt to "PROVE" she was real, in defense of my scathing ******* on her credibility,, when in fact it actually sealed the case in favor of the fact she wasn't. I added explanatory notes at the end of the texted dialogue from her only unblocked (at the time) method of contact, her second number. Another critical mistake she made was the decision to call me on the phone. She sent the first video the first day and after watching it, I had her voice stuck in my head. When I heard the voice on the phone, it wasn't even close, not to mention the whispering African male voices in the background! (laughs) Then, an email header analysis also indicated she was in Nigeria which conflicted with her story of being in Oklahoma. She has a 233prefix number which she claimed she "roamed" to be able to contact her Mom or something, when in fact it's purpose is to allow people OUTSIDE of Africa to call IN!. The sharp edge of her personality was irritating and, as a man, had she spoken to me in person the way she did here? I may have slapped the **** out of her and I have NEVER hit a woman. Then again women don't talk to me in that tone either. The second or third day we were still getting along (once I got What's App finally loaded on my phone) and we were going to immediately book her a flight to come visit. The ticket was $500 which I was "going to pay for" but while I was actually booking the ticket, she disappeared and I was unable to finish. Her explanation was so idiotic that I went off on her and this caused the contact to flare out as quickly as it began.

Emails from Racheal Kathy Smith to Jonathan (USA)
Hello dear you look charming.... can I get to know you

thanks for responding to my message. Am racheal smith, am 30 years old, am single never married before, am from Oklahoma tulsa, am a Fashion and Photography Model and am looking for my soulmate but it would be good to start with friendship and see where it goes from there. Tell me about you

hope my profession is not an issue to you?