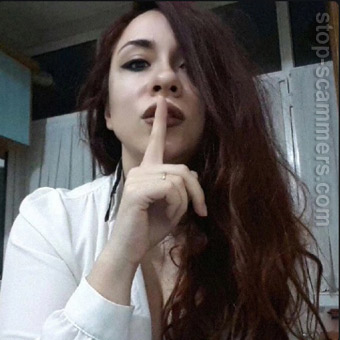 REPORT N1 (added on October, 17, 2016)
John (Brazil)
This report deals with Roson Delgado, aka Clara Delgado the most despicable scammer I have come across yet. She has a page at Okcupid where she says that she is looking for friendship and romance with a man between the ages of 52 and 72 for a long term relationship. Her location at okcupid is Sweden. She told me that she is American but I found that her knowledge of the English language leaves a little to be desired.
She was quick to tell me that she was no longer in Sweden as her 20 year old daughter had had a serious car accident whilst visiting her boyfriend in Mexico. She told me that her daughter was on a life support system and in coma at a private hospital called De Maria located in Monterrey, she did not know the full address of the hospital. I offered to send flowers and asked her to find out the full address which she did and my research shows that this hospital does not exist.
She told me that she was sitting at her daughters bedside holding her hand whilst texting me, NOTE; mobile phones are most certainly not permitted near sensitive life support system equipment.
She sent me a photo of her and her daughter taken before the alleged accident and I asked a Doctor friend for advice on this photo and he confirms that the daughter by her ****** expression and her unformed arms and hands was probably suffering from cerebral palsy.
I asked Roson to tell me what her daughters condition was and the injuries that she described to me were shocking. I asked her for a photo of her daughter in her hospital bed and Roson sent me one but the position of the girls hands in my opinion are not contusive with an accident but more probably a long term disorder.
I have to say here that up until now and although Rosons story was flawed I was still believing it may be true, you will see from her hangouts chat she is very clever. To show you how clever this one is I will describe one part of our chat, I told her that I was ex Scotland Yard and that I suspected that another woman who had contacted me from okcupid was a scammer, she quickly asked for a photo and the suggested I ask my suspected scammer to send me a selfie and quickly told me she was laying on the bed and would take one of her to explain what she meant. The photo arrived and for me Roson is either the actual scammer or she luckily had a stock photo!
After four or five days of texts between us, by chance I Roson had a facebook page in the name of Clara Delgado, fortunately or unfortunately facebook informed her of my visit to her page, she was most surprised that I had found this page and I think she decided it was time to work her scam.
She asked me not to send flowers but cash instead as she was hungry and then went on to ask how much I would send her. I asked for her bank account number so I could transfer by computer and she asked me to send the cash by moneygram or Western Union. The address she gave me is in a male name.
I am sorry about the length of this report but I felt it needed a lot of explaining.
REPORT N2 (added on June, 24, 2019)
Helmut (Australia)
I was contacted by Clara Delgado on OKCupid, but moved to google hangouts quickly.
Clara started to chat with me on google-hangouts in 7. May 2018 (the chat from OKCupid is gone, because her account was deleted). The next day, she claimed that her daugher is in coma, fighting for survival. This is a contradiction to the previous scam-report about "Roson Delgado" from the guy from Brazil, who wrote the same story - but two years earlier, in 2016.

Emails from Roson Delgado to John (Brazil)
Hello John, Joe are you? You're very much welcome and I also need to thank you for taken your time to write me, I'm one of the people that believes age is nothing but a number and secondly what really matter is what is inside of you to offer to the relationship or friendship so I don't believe in age. I appreciate the nice compliment and the congratulations lol but I'm currently in Mexico now because of my daughter who had a terrible car accident during her meeting up here with boyfriend who's from here.....Anyway, let me know if you would still like to stay in touch after reading this. Thank you

Thank you so much for your concern about my daughter and yes, she was badly injured because she has been in coma since the day of the incident....I got your gmail address and I'll add you on hangout for us to be able to chat and start to know each other better....mine is rosondelgado85@gmail.com

Yes, I'm at the hospital now but I'll be returning to my Inn around 8pm....I'm just sitting here with her in private word....I'm not leaving her to talk to you and thanks for so being considerate