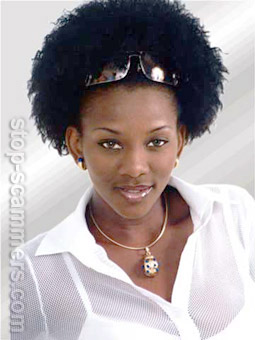 REPORT N1 (added on July, 15, 2005)
J. B. (USA)
She first contacted me on ICQ. She then asks to switch to yahoo IM, so she can keep contact with other victims. She told me she lives in Nigeria,buther ICQ profile says Uzbekistan. She says she is a daughter of a tribal queen and her family is very important. After a couple
conversations she says she just broke up with her boyfriend and wants to take a vacation and just my luck she is taking that vacation in my city. Here is where all the trouble begins. She says her mum can't stand to be
without her and refuses to pay for the vacation, she gets so upset. She says her sister is willing to help her with $600, but she still needs $400 and that is where you come in. When I told her i did not have the money she gets very persistent, saying "it's not like I'm asking you to pay for all of it". This girl claims to be an actress in Nigeria, her mum is a tribal queen of Nigeria, and she can't come up with $400? Because I am of no help with cash she asks me if I bank at Bank of America or Bank of Wales, she has a money transfer at one of these banks (she doesn't say
which until you tell her which bank you go to). She needs me to open an account and transfer the money and I only need $100 to open this account, I can withdraw the start up money and close it after I help transfer the funds. She knows exactly what you need and how to do it (what a pro). I told her to take the money her sister gave her and open the account, transfer the funds, and close it. She did not like that idea. She then asks if any of my friends go to Bank of America and if I could ask them to open an account and transfer the funds. Haven't heard too much from her lately. I switched my ICQ name and she contacted me, not knowing it was me. The thing of it was she was already talking to me on yahoo IM. She was
holding 2 conversations with me on both ICQ and yahoo IM and she didn't realize it. If you don't fall for her weak story you can actually have some fun toying with her, her stories and attempts at scams have too many loopholes to get out of it. I've been toying with her for a couple weeks
now and it never gets dull, make them sweat I say.
REPORT N2 (added on March, 7, 2006)
Rollo (UK)
Can't do letter heading except as separate procedure , Hence use screen shots of relevant parts. Sorry about large files but no other way. This woman was setting me up to start .Once I mentioned that I was aware of scammers, she was gone at once. I did point out carefully that honest people should not be offended by my words.
REPORT N3 (added on April, 4, 2006)
Gary (USA)
Identify's herself as girl whose father was killed and left some 27.3 million in a trust. She can not get it without you coming there to set up a bank account for her to get you to advise her how to invest. Old scam for sure.
REPORT N4 (added on September, 28, 2006)
Wollch (Israel)
I did recieve the anexed email and photo.
It is a scam simmply becouse things are not done like the writter of the mail implies. Also it's not the style of a 19 yrs old . It seems to me that someone else is behind the anexed mail & photo.
I'll probably never know since I won't wait to get scammed.
REPORT N5 (added on September, 28, 2006)
Ponce (Philippines)
Contacted me to claim for her some $27.3 million deposited in trunk by her late father Chief Muyiwa Martins.

Emails from Pauline Kone to Gary (USA)
Dear friend.
I am delighted to write you.My name is Grace,I am sorry if this mail will come to you as an embarrassment or a suprise,I just felt like empting myself to you,after reading your profile ,I decided to confide in you,as am faced with total frustration and hardship. My ernest prayer is that you find this mail in good health and blessings. I am presently residing in Abidjan,Cote d'Ivoire.I left my country with my father after the death of my mother during the war in our country and we came here because my father owned a business here,(cocoa business), during the going political crisis here which has turn out into a civil war since 2003,my father was attacked and killed here at the hit of the crisis as the rebels were killing prominent foreigners with the reason that they were financially supporting the government against them and the rebels are accusing the government of doing the killing.
Presently,I am staying in a REFUGEE camp assisted by the Red cross organisation,due to the war which the camp is securized by united nations forces and after the death of my father,our house was set ablaze,I was unable to meet my needs pay my bills and accommodation and in my dilemma which was another reason for going to the camp,where I could at least feed and sleep as I did not know anyone here.
Secondly,my late father concealed some amount of money in a trunk box and deposited it in a safe keeping house to the turn of $27.3 million dollars which I will want
Read more

Emails from Pauline Kone to Wollch (Israel)
Dear one
It is a great pleasure and interest I have on you that made me to contact you though we haven't meet neither seeing each other for the first time but before I decided and pick up your address to write this letter to you I prayed over it and committed every thing to the almighty God hand for him to direct me to a well trust Worthy and God fearing person who will be my gaurdian as I am orphan.

I am leonine kouassi i am 19 years old , the only daughter of late Chief Pascal kouassi of kouassi royal Family who is the Chief Kindred of our community and a wealthy Cocoa Merchant here in Abidjan Cote D'Ivoire being the highest Cocoa producer in the World. My Father is doing Exportation of the Cocoa Crushed Seed to Abroad which he harvested from his Cocoa plantation Farm areas here in our town called (Soubre in Sub-Ouest of Cote D'Ivoire) before he was poisoned to death on the last 29th December 2005 by some of our Family relatives during the end of Year Family meeting celebration as a result of envy because he inherited the Chief tittle with the Cocoa plantation Farm from his Father being the Ex-Chief of our community (Soubre) before he died on the 17th June 1987 , while my Mother died during delivering of pregnancy which could have been her second child When I was a baby according to what my Father told me and after then my Father took me so special because I am his only begotten daughter and he cannot remarry again because it is against our tradit
Read more