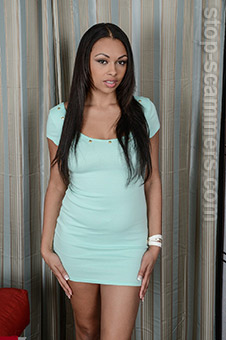 REPORT N1 (added on October, 27, 2016)
John (Brazil)
She first contacted me via Singles Dating World where in her profile she describes herself as 'English Baby' and says she lives in Tokio, Japan.
I gave her my gmail address and she then wrote telling me that she was Syrian and had escaped from Syria to Senegal. What a terrible hard life this poor girl has had.
She sent me photos of Bethany Benz who I have never heard of but I suggest you visit her site, wow.
By her third mail she was asking me to send money to buy food, she gave me her telephone number and requested that I call her.
She has actually sent an address to forward cash to.
I broke off here as I fear she might start sending filthy pics and these could definitely cause me to have a cardiac arrest.

Emails from Lutricia Saladdin to John (Brazil)
My Dear,
How are you doing including your family,i am happy to be your friend,i believe our friendship is going to yield things positive in our lives,My Names are Lutricia Cheriyan, i am 25 years old,am from Aleppo in Syrian, the daughter of late Mr. Chacko Cheriyan.

My father and my elder brother Ouseph died at the age of 28 years and my father was about to enter his 50 and he died as one of the Syria soldiers 2 yeas ago by Syrian rebels i was lucky to escape death and ran to Lebanese refugee camp through the help of Bashar al-Assad soldiers. as for my Mother i didn't know much about her because she died long time ago when i was 6 years old as a result of stomach cancer,i am writing to you from Senegal West Africa,i have attached some of my pictures here,i will be happy to know more about you.
Thanks
Yours Lutricia

My Dear
I am glad to read your mail and how are you,hope you are fine and i thank God to have you in my life,dear like i told you before am from Syria,i resided in Lebanese refugee camp that worth More than one million in population for 9 Months and i left there to Africa through one of NGO representative Non - Government Organization that visited the Syrians in Lebanese refugee camp in June 29, 2014. in June 29, 2014.i met this lady in person and approach her for help,luckily for me she was touched after telling her my experience in life,she promised me that she will help me out of the camp to
Read more