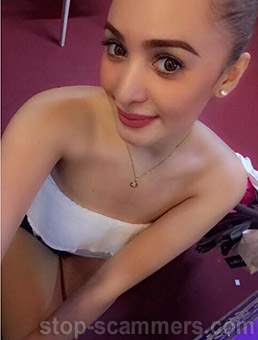 REPORT N1 (added on November, 8, 2016)
Robert (Spain)
Having been scammed before via Dating Direct, I suspected this girl a scammer from her behaviour. When I "Favourited" her she immediately came back to me suggesting I contact her by her E-mail address which was functional. Strangely, Being ultra assertive due to history, I realised that she hadn't even looked at my profile. Claiming to be aged 30 and living in Bath UK and currently sourcing artwork in Asia for her business, I used the 'Header Analyzer' provided to find that the message had been sent from California. On E-mail communication, she first denied knowing what an IP address was. When finding the exact location using the Google map and referring to several nearby businesses in a fake note, she has not appeared since and blocked me from seeing her profile. Surprise, surprise. I have two posed photos which she initially attached to an e-mail and her obviously prepared written message. I say obviously prepared as the use of English was perfect, unlike that used in the few short replies previously received. This is quite obviously a scammer but on examination think it may be the one Alexa listed on this site. This time I dealt with things before aany money request, although no doubt others won't. I'd be interested to know your opinion as to whether the two profile pictures match that posted on this site.

Thanks for the message. well let me say a few things about myself. I am Alexa Colt by name and I am 32 years old..I have been out of a relationship for 11 months now, I suffered heartbreak from my ex, I didn't know he was sleeping with my best friend and ever since I decided not to go into a relationship. Now I feel I should try to meet that special someone out there who could really be the one for me which is why I am on this site but this time I am trying to be very careful. I want someone that will be sincere to me as I hate being lied to. Okay I like doing a lot of things for fun like watching movies, listening to music, spending time with that special someone and My Job is to buy and sell artworks mostly Paintings and sculpts and I am also Involved in charity Organization activity. Sometimes I travel just to get suitable artworks to sell and on rare cases I travel out of the country like right now I am in Philippines which is in Asian to get local Asian artworks which should be well marketed in the country when I get back. I am looking to meet someone that is sincere, caring, understanding, romantic and fun to be with.Why don't you tell me more about yourself. what are your likes and dislikes? whats your favorite color and food? Do you like pets? If you do ...do you have any? Also if there is one thing you wish you could change about yourself...what will that be?