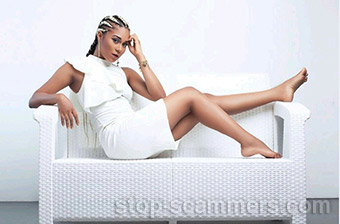 REPORT N1 (added on December, 15, 2016)
John (Brazil)
WITHOUT DOUBT THE MOST CLEVEREST OF SCAMMERS I HAVE COME ACROSS YET This report deals with Sandra Morgan an okcupid client who is scamming using stolen photos of Ghanaian pop singer and television presenter. She first contacted me at cupid and it took me a week to get her to chat anywhere else, however this morning she finally contacted me on whatsapp.
I believe her real name is Courtney Rebecca Assibey. She had turned her photos around to avoid being found on image searches but eventually one photo came up trumps.
She asked if we could spend Christmas together and I agreed, she then told me that she had no money and asked me to pay her plane fare, almost $2000.00. She said she was going to take a bath and take some hot pics for me. These pics she sent but not of Sorokiss as the heads are cut off.
I being in a benevolent mood sent her some pics of Sorokiss and an attachment of Sorokiss singing, can you believe she came back and told me she really is Sorokiss, Sandra is the name she's using now, lol. Next thing she decides to prove it to me that she really is Sorokiss. She video calls me and when I answer a ********* guy is on the screen but quickly turns the phone to a girl who is remarkably like Sorokiss. The connection then falls at my end. She calls again and we try to chat but it falls again. I give them the story that my wifi is weak and demand she make a video which she does. Incredible likeness, they chose their model in Sorokiss well. She whilst talking to me, saying my name holds up a piece of paper with my name on, a usual stunt with pics but not video. I now ask for more mucky photos and she asks if I am going to send the money because she has booked a flight to me in Brazil for the next day.
Created: 2016-12-15    Last updated: 2021-05-21    Views: 1756