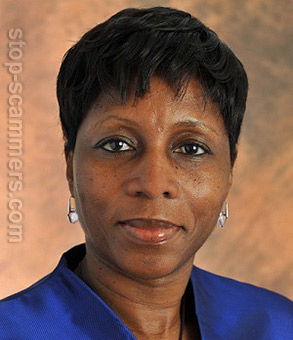 REPORT N1 (added on February, 7, 2017)
Philip (USA)
This report deals with Lira Mandoza a South African woman who contacted me at my Hotmail address. She claimed that was dying of cancer, she had money and wanted to transfer the money to my account if I would care for her 15 year old daughter. I asked her for photos of her (Lira) and some documentation to prove that she was legitimate. She sent me 3 photos, two of her daughter and one of her (Lira) South African Identity Card. I searched the ID card on the net and the photo is of a South African Deputy Minister. The ID is a forgery.

Romance scam letter(s) from Lira Mandoza to Philip (USA)
FROM: MRS. LIRA MANDOLA
BLOCK 112 BOLINGTON
PARKTOWN, JOHANNESBURG
SOUTH AFRICA
Email: liramandola010@gmail.com
STRICTLY CONFIDENTIAL
My Dearest in Christ,
With due respect, trust and humbleness, I write this proposal to you, which I deem would be of great interest to you. I found your contact while I was doing a private research on the Internet for a reliable and capable foreign partner that will assist me and my only daughter Mishael.
My name is Mrs. Lira MandoLa a nationality of South Africa; I Retired with South African Women in Construction Association. View the profile of South African Women in construction at (website by clicking (http://www.khuthaza.org.za)and read about us. I am married to late Mr. John Mashela; we were married for twenty years with a child. He died after an illness that lasted for four weeks. I need your assistance that was why I write to you through divine direction; it is my desire of going into relationship with you
Before my husband's death he confound to me that he deposited the sum of USD$30.5M(Thirty Million Five Hundred Thousand U.S.Dollars) with Finance/bank Presently, This fund emanated as a result of an over-invoiced contract which he executed with the South African Women in construction . Though I assisted him in getting this contract but I never knew that it was over-invoiced by him. I am afraid that the government of South Africa might start to investigate on contracts awarded to South African Wom
Read more