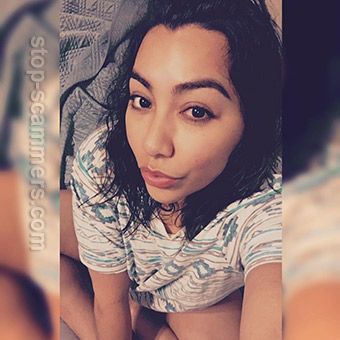 REPORT N1 (added on February, 15, 2017)
Phil (Brazil)
Extremely clever scammer at Mingle 2 this one, claims to be a nurse with the American Armed Forces in Syria, and has a daughter who lives with Sophia's Mother in the States. First come the "I love you" tactics and then she wants me to leave Mingle 2 or deactivate at least.
After little chat she goes off duty to her billet takes a shower and then mails a couple of **** photos and a video which she says she has just taken for me, problem is these photos are already on the net and are called "Hot Army Girls". She then decides that she wants me to apply for early leave for her so she can come to me in Brazil. She sends me the mail address of her Welfare Department and asks me to apply saying that there will be some cost for this operation.
The photos that she sends are so reminiscent of **** Star that they lead one in the wrong direction (comparison attached) even my wife insists that they are the same person.
Further searches show the photos belonging to an Indian **** Star whose name I am unable to trace. I am breaking contact at this stage as the documents that the phony Army Welfare have sent require personal details.

Emails from Sophia Gonzalez to Phil (Brazil)
Hi, i am deeply sorry for my late response to your letter, i have been busy working lately, meanwhile, i am Sophia and i am new on the site we met, i am single and i have been single since February 2015, i seek a good man with a pure heart for a good relationship or more.

I am originally from Bexhills in the u.k but i grew up in Dumfrie, VA and i am a Field Surgeon General Medical Officer in the U.S Army section commander of the 82nd Airborne Division's, 1-504th PIR, Division Peace keeping force, currently stationed in Tishrin Dam Northeast Syria.

I am single, never married but i have a little boy, his name is Jesse, he lives with my mom in Gilman, Iowa. I am 30 yrs old, i was born March 7th86, now your turn, tell me about yourself, where are you originally from, how long have you been single and what do you seek? do you have kids, what is your birthday and month and how old will you become and what you do for a living?

Feel free to write me and ask your questions and also send me some pictures, tell me more about yourself and what you seek in a future partner? Do you live alone and how old are you? what is your full name

I have to end my letter here as i awaits your response, meanwhile do you have Facebook / Hangout ?

Hi John
thanks for your quick response, how was your day and i hope this letter meet you in good and perfect health and also thanks for the photo's, you are good looking and attractive y
Read more