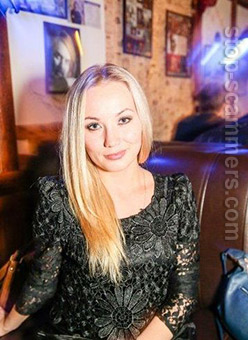 REPORT N1 (added on February, 17, 2017)
Chris (Spain)
I contacted the person on Collarspace in the summer of 2016 and she replied to me. She told me that she would be interested in a one-month vacation in Spain (where I live) and I invited her. After our first contact in Collarspace we kept on emailing each other for about 6 months and exchanged pics. Something strange and unusual was that she did buy clothes on the internet in the United Kingdom and had them sent to me (because she told me the internet store did not deliver to Russia) so that I could send the parcel back to her address in Rostov on Don. I did send the parcel back to her and a few days later she told me that she had received the parcel and I did verify it through the Russian post site. So I am pretty confident that her name, address and phone number are genuine. She told me she had applied for a visa to Spain and several weeks later that her application had been turned down. Then she told me she had applied for a visa to Portugal but that the employee at the visa office told her that it would be helpful to show evidence that she had 1200 euros as proof that she would have financial means during her trip. She had not the money so I sent her 1200 euros through Azimo. Then a few weeks later she told me her visa for Portugal had been approved but she missed 300 euros for the flights. I told her to use some of the 1200 euros I had sent her previously but she told me that she had invested the money in a 2-month deposit to get interest on it and that she could not redeem the deposit before its term at the end of January 2017. So I sent her 300 euros through Azimo again. A few days later she told me she had traveled to Moscow and was banned to fly to Madrid by an official at Domodedovo airport because she had an unpaid debt of 600 euros. I sent her again the money through Azimo at a bank in Domodedovo which she picked up. What surprised me is that she had really traveled from Rostov on Don to Domodedovo because I checked with Azimo that she picked up the money at a bank in Domodedovo. Then again she asked about 400 euros for travel insurance with a Russian insurance company and I refused to pay since I knew travel insurance was much cheaper. She then told me she went back to Rostov on Don and had eventually secured the insurance through loans. But she asked me again 200 euros for traveling to Domodedovo again. I emailed her that I had no more money and she then told me she could not come to Spain and asked me to send her other clothes that I had received after she had bought them at an internet store in the United Kingdom. Since the 1200 euros deposit had reportedly come to its term I asked her to reimburse me the money since she would not travel. She said she would reimburse but never did. She stopped emailing and me too. Also I kept the clothes she had sent to my address from the United Kingdom online clothes store.

Emails from Irina Olegovna Shelestova to Chris (Spain)
It's Irina, from collarspace site. My nickname is IrinaShel. I want to check how e-mail works.
Irina

Hello Chris, i am glad to see your letter:) By the way, I forgot to say, I have two profiles on CS.
IrinaShel and Larpie. At first I wanted to go to France, but then opted for Spain.
In Spain, more warmer climate:)
May i ask? Are you in a relationship with someone? What kind of girl, you'd like to see next to you?
In men, I appreciate such qualities as decisiveness, reliability and sense of humor.
I am 26 years old. I am single, never married and I have no kids. Do you have children?
What do you do for a living? I am an specialist on land issues.
I will be one month in Spain. I think that's enough time so we can know each other.
I have attached a couple of pictures. I'll wait for your quick reply.
Irina

Hello Chris:) I'm glad to see your letter. I plan to fly to Spain in october.
What kinds of hobbies or interests do you have? Maybe we have common interests?
In my spare time I like to read, watch movies, listen to music, picnics.
Sometimes I go to the pool, to keep in shape, when not too tired at work.
I would like to ask, your friends or close relatives know, that you like ****?
Ok Chris, bye for now. I'll wait for your answer;)
With respect, Irina