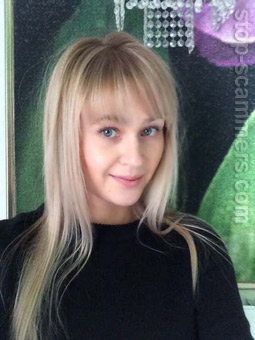 REPORT N1 (added on February, 28, 2017)
Jim (Canada)
She contacted me early Dec 2016. Wrote to her up to the end of Dec. she as hinting about the cost of visa, flight etc. Stopped writing to her at the end of Dec. mid Jan you wrote wondering why she had no heard from me.
In Dec she said she would call me on phone. On Feb 14 I got a call from the number listed, a New York area code. Call was clear and her voice seem like a much older person. I suspect it was a VOIP call Last letter was Feb 20 again wondering why I didn't write.
REPORT N2 (added on April, 13, 2017)
Peter (New Zealand)
Svetlana first approached me by email. She told me she was looking for a man she could have a long-term relationship with. She was not concerned that I was much older than her (66 v 28). When I told her I had been scammed before she said she thought it was terrible and apologised on behalf of all Russian girls. She told me she worked in an electronics store in Kazan selling computers.
She wrote me loving emails every day some with photos but never anything ***** and she said she would not write about *** because she was using a computer at work.The friendship developed over the next few months and she started planning to come to see me in New Zealand. She didnt quite have enough money for the tickets so I helped her by a Western Union transfer.She asked me to send the money to a friend of hers Natalya Kozlova. I should have queried this but didnt. Obviously ,this woman is also part of the scam.
Later she asked me for $2700 which she said her customs made her take with her ($30 per day) then when she tried to leave Moscow she was told she would have to pay her bank $2500 to partly repay a loan she had taken to renovate her apartmrnt .
Finally after all these payments she gave me details of her flights to New Zealand . The day after she was due to leave Russia she emailed to say she could not take the flight and that she would return my money in two days time. I have emailed her several times since but have had no reply.

Romance scam letter(s) from Svetlana Verkhoturova to Jim (Canada)
Hallo my stranger, I hope that you wouldn't delete my message. I am writing you, for I would like to get acquainted with you. Iam is Svetlana. I am twenty eight and I reside in RU. I had got your contacts at a marriage agency. I look for a somebody for ***********, perhaps for starting a family. It is important for me, that a husband should be faithful, serious, fair, amicable. I think all these characteristics and we will be eager to start communication. I portray myself as provident, loyal, sincere, warm-hearted person. If I fall in love with somebody I will make him the luckiest person in the world. I truly want long to get acquainted with. Please message me, and I will present you more detailed information about me and will present you my fotos. I am waiting for your mail. Wish you a good day.Svetusha

Hey my new friend Jim! Dear you are very nice and serious person! Thanks for the photo! I am very glad that you interested in me. And I will to make you to be not disappointed in me and to know as much as possible about me. I also want to know you better. I’d like to say, that I am very glad to get your replay and I think we should begin our acquaintance! I want to tell about myself a little bit! My name is Svetlana if you have desire, you can just call Sveta! I live in Russia, in the city Kazan. I am 28 years old. I am quite attractive girl. But about the qualities I won't speak now, it is bad to tell it about my
Read more