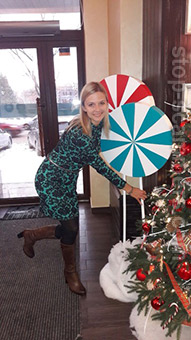 REPORT N1 (added on March, 22, 2017)
Robert (Canada)
I became acquainted with Zhanna in February on Natasha Club with her user ID cycling_girl. We communicated until our first meeting in Kharkov. Irina Kascheeva was assigned as translator. Zhanna said they did not know each other, but the private investigator found the contrary. Zhanna was originally from Donetsk, she briefly lived in Kharkov, then moved to Kramatorsk when the conflict settled down. On the Natasha club site her city was Kharkov, but it was Kramatorsk, her english was listed as excellent, but she needed a translator. She said it was a mistake, and the agency did not update her location. The licence plate of the Mazda Irina was using had a Kramatorsk dealer frame, and I questioned her about it, and she said she bought it from a friend there.
There were some things that Zhanna did that brought about some small red flags, but I overlooked them at first. She would always talk about being an honest and sincere girl. She would avoid answering direct questions about her personal life, and she would avoid talking about her parents and family. Her level of english was questionable, as she claimed her english was not good, and required I pay for translation services.
On our second date, when we were at Dafi mall in Kharkiv, we went into Sportmaster. She really loved a sport costume, and her translator asked if I would buy it for her. I felt it was not such a bad idea to help encourage her to have a healthy life. We seemed to be falling in love, and I truly loved her, and she truly seemed to reciprocate. I would later find out she was a very good player. After a few visits, she started giving hints about getting married, such as wanting a husband for her birthday, and presents.
She stayed with me in Kharkov. But it turns out she lied about her grandparent's illness.
She would come back to Kharkov for her birthday. It is at this time that she very much insinuated she wanted to get engaged. For her birthday, I would surprise her. I proposed to her, and she agreed. After her birthday, she would return to Kramatorsk. When asked about her engagement and what her family thought, she was unusually silent. When I mentioned coming to Kramatorsk, she stated she wanted her translator Irina and she would come back in a few days. At this point I got very suspicious. I had the occasion of calling my lawyer in Canada over Skype about doing a pre-nuptial, and he advised me to get a private investigator, as it was very suspicious that she blocked me from her VK account, and did not want me to go to Kramatorsk. She also stated she was scared of me.
i did give her the benefit of the doubt, and convinced her to come back before I returned to Canada. It was arranged that the private investigator would follow us during our date, and afterwards. After our date, Zhanna stated she needed 200 Gryvnias in Taxi money to go to her friends. After our date she took the taxi, while I paid translator Irina Kascheeva. The private investigator followed, and Zhanna ditched the taxi 300 metres ahead at Kalamya Bar, and went inside. After I had paid Irina, Irina picked her up and took her to her place on Druzhby Narodiv Street. She stayed there for a while, and she went to another friend Tatyana Scherban afterwards. When Irina drove Zhanna to her place, a black volkswagen owned by a man by the name of Dmitry Rudich was following close the whole distance, and waited outside until Zhanna left Irina's place for Tatyana's. The following night, the same happened but no black volkswagen. On the 17th, Zhanna asked for money for Bla Bla car, 1000 Gryvnias, but Irina drove her to the bus depot. Zhanna was dishonest by taking more money than she was entitled to. It was also revealed by the investigator that Zhanna was splitting translator revenues of $25 an hour. Irina would also charge me for use of her car, which she would also split.
Ten days after returning to Canada, I received a very peculiar message from Zhanna stating the end of our relationship. The level of english was too good for someone who needs a translator. In further checks by the private investigator, it was revealed she had a boyfriend by the name of Viktor Nikitenko, which she travelled to egypt with. She lives with him at the Parkova street address, when she is not at Stepana Korshuna.
I had a private investigator the hotel staff recommended me, and then I got a second opinion from another firm. Both came to the conclusion that Zhanna was only out for financial benefits. She would also earn money from video chat with men.
Created: 2017-03-22    Last updated: 2017-03-22    Views: 1394