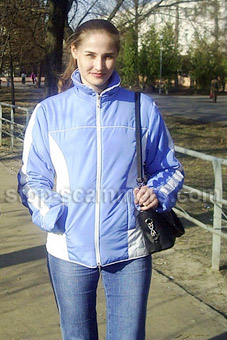 REPORT N1 (added on July, 27, 2005)
Alain (UK)
I meet her on american single exchange some letters after a few fall in love ask for 630 euro to visit me in the UK i proposed to be her sponsor she refused following that she trusted the agency i refused to send the money we exchaange another few letters and no more sign i visited a few web about scammer and i found the same letters about money i lost the one which is the same that this one, so after visiting another web site i saw that she could be the friend of anna reshetnikova or galina gonchar.

Emails from Oksana Belicheva to Alain (UK)
Hello my dear Alain !!! How are you? How are your week-end? I think, what was good? I have spent very well. I did not think, that there will be all so well. We have perfectly spent in park on Saturday. In the afternoon with my girlfriend went on park to Sunday in the afternoon. The sun brightly shined. It was very wonderful. You saw sometime such beauty. I for a long time did not see it. I had such fine mood. I have lead evening in domestic conditions. I had viewing TV in the evening. I looked comic transfer. I laughed at tears. It was very interesting and ridiculous. Speak, that your humour and Russian very much differ. Once I had your viewing comic transfer and have not understood anything. In itpeople played a trick the friend on the friend, but it was not ridiculous. I remember there there was such situation when along the street there was a young man and bore the big flower in the big ***. He touched passing by people this flower (not a ***). He did it with feeling not faults. As thoughvhe does it not specially. I have not understood in what here humour. If in Russia who that started so to joke of us, to him this flower on a head would dress together with a ***. Ha. Ha. Probably it is one of the facts of distinction of our mentalities.
Alain, today I had not a lot of time and have gone to travel agency. Today manger has again reminded me of payment of their services. Alain, so it is inconvenient for me to ask you the help. But I do not know what to d
Read more