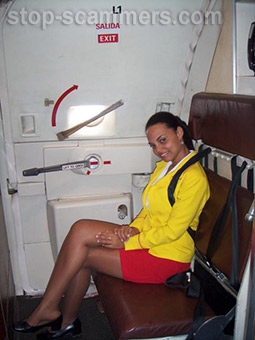 Romance scam letter(s) from Flora Solomon to Tom (Canada)
My Dearest,
I am more than happy in your reply of my mail. How was your day?, Mine is a little bit cold over here in Dakar Senegal . My name is Flora, from Liberia in West Africa, 23 yrs, 5.3 ft tall, fair in complexion, ( never married before ), presently i am residing here in Dakar as a result of the civil war that was fought in my country. My late father Dr Tombekai Solomon was the personal adviser to the former head of state before the rebels attacked our house one early morning and killed my mother and father in a cold blood, my mother was six months pregnant before she died. It was only me that is alive now and I managed to make my way to a near by country Senegal by the help of UN army through an old woman, where i am leaving now in the mission headed by a Reverend Father, i used his office computer to send you this email and i only enter his office when he is less busy in his office.

In this camp we are only allowed to go out only on Mondays and Fridays of the weeks. Its just like one staying in the prison and i hope by Gods grace i will come out here soon. I don't have any relatives now whom i can go to all my relatives ran away in the middle of the tragedy the only person i have now is Rev Francis Warner, who is the pastor of the ( All Saints Churches ) here in the camp he has been very nice to me since i came here but i am not living with him rather i am leaving in the women's hostel because the camp have two hostels one for men t
Read more