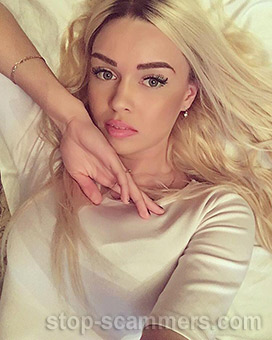 REPORT N1 (added on June, 29, 2017)
John (Canada)
I received and interest on Match that she was interested in my profile. Her profile said she was from my city and I was surprised that when she wrote me for the first time it was not her but a younger woman and that her pics where different from the dating site. She said it wasn't her profile profile, but the profile of her friend from Canada. She used her friend's profile to get to know me. She mentioned that she came to Canada several years ago as she finished Institute in 2014, she traveled to practice in Anzac, Alberta. Studied English and moonlighted as a babysitter. After writing back and forth she got very attached and falling in love rapidly, eventually mentioned that she will have vacation in a couple weeks. That it would be a good time to meet in person. Asked me if I would like to visit her in Russia or meet her in Canada. I told her that going to Russia was completely out of the question because it's too dangerous. And for her to come to Canada she would require a difficult hard to obtain visa. In the following mails, I received a request from her to send her money. Told me I don't have to worry about her documents. That if she books a visa at a travel agency and not at the embassy, ??then all her documents will be ready within 4 days with a one hundred percent guarantee that all her documents will be ready on time. She couldn't pay for her trip and demanded my help for 1000.00 but I told her it's useless if you don't have the visa. Next thing I know is I receive a scanned file with visa in passport pages the next day. I didn't notice at first but only later it had around 4 errors on it. By then it was too late I had already sent her the money. I then told her about the errors and she gave me a sobbing story on the phone with tears. She was consistent and attempted to contact me again the next day with another scanned visa and 3 of 4 of these errors were surprisingly fixed in the new scan which made me laugh. She continued to demand for money with a new request. This time she needed to have money because Customs Service requires that each tourist has at least 200.00 dollars per day. So she wanted my help and promised to refund me when she arrives at the airport. She also attached in this same e-mail fake documents and fake receipts from the travel agency. I never wrote to her again.
Created: 2017-06-16    Last updated: 2021-06-02    Views: 1689