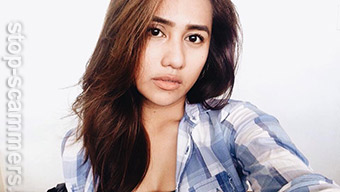 Emails from Eloisa Castro Martinez to Claus (Denmark)
Hello... How are you? This is Eloisa..

Hi Claus,,nice to hear from you again... Thanks for letting me know you... and also thanks for the pictures youve sent me i love them..about myself..Im Eloisa C. Martinez, 34 years old single,no kids and never been married. Im looking for a man that i can spend the rest of my life, now im in the period of longing for someone. My friend recommended that site to me because her sister was able to met her man on that site.Thats why i joined that dating site, actually it?s my first time to join such internet dating site.

I studied in vocational college, under health care and i have worked voluntarily for about 1 year in Philippines as a nursing aid, and intended to further my studies to become a nurse.

I was living with my family until my dad died 2 years ago, he had ****** and and was taken to the hospital, but when we began to run out of funds for bills, we decided to take him home, though he was still under intensive care, but one day he had a heart attack and because of the poor emergency services in Philippines, there was no ambulance to take him to the hospital, before we could get a help from neighbors and reach hospital by car, it was already too late and the doctor said he is already dead on arrival, that was how i lost him in my arms, after that, things became very difficult because my mum wasn't having a job, feeding became a very big challenge as we had no savings
Read more