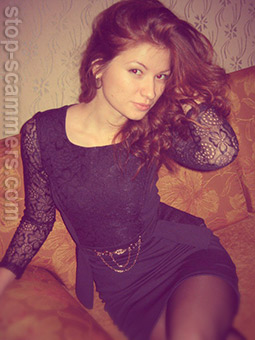 REPORT N1 (added on July, 31, 2017)
William (USA)
Contact was initiated on May 9, 2017 when an attractive blond and blue eyed Caucasian woman made me her favorite on Match.com, and was located in a community in either Vermont or Massachusetts, either being close by to New York, where I am located.
To date, we have corresponded 61 times with one another and the contact continues as I have discovered her identity on this website and confirmed it by her request for funds that was made previously by a member to Stop-Scammers.com, named Chuck (USA,) who reported her in March of 2017 to this website. The bank numbers for money transfer matches exactly, but the pictures of the woman are different, as are the contact email addresses.
The first thing that raised my suspicions was that her picture on Match was different from the ones she provided after our correspondence began off site and by email exclusively. I requested and received a picture of this new and much finer looking woman holding my name in a photo which at least confirmed to me that the photos of the writer and the pictures of the new woman were the same person. I will include the original Match photo and as many of the authentic photos as stop-scammers.com will allow.
Olga began our writing by saying what she was looking for in a man. She wanted an American because she had read how American men treat women like ladies, and are genuinely affectionate. She is also 29 and unmarried, while her friends all married and with children, so she is very lonely and wishing to start a new life so long as child bearing was in both our futures.
Her original photo was **** as ****, but what followed were dated photos of her being younger, and she explained that she wrote from a library computer in the city of Megion where she took a bus to after a day's work at the Veterinary. Access to technology was limited, and she was not very skilled on computers. Getting access to camera's was difficult for her, but upon my demand for a photo of her holding my name, she was able to produce it. This was the most beautiful ****** of this woman yet!
There was a strange anomaly that occurred when we first wrote to one another, and it was that she expressed frustration that I had not answered her questions and was ready to cut off communication if I was not a serious writer, and I had to explain that I had only sent her a greeting email, only. She had never written to me before this. It occurred to me then that she was writing to other men and not just me, and I decided to see if I had any game left and went hard for capturing her affections, which occurred quite easily, as I look back on the whirlwind of correspondence with her.
The request for money came after we began to discuss her coming to America. She discovered, tragically, that the cost of coming to America was much more expensive than she ever imagined and where she needed $1500(USD), she only had $230(USD) after presumably years of saving. I thought the scale of economies were very different and this was believable. This is where I delayed a decision to help her financially, so letters explained how she and her mother were hitting up everyone they knew for money. Banks would not loan money to her or her mother due to their lack of property ownership. This is when I offered to help, but delayed it by making up a story about divorce, bankruptcy, and needing to save up the money myself.
This delay frustrated Olga, and she mentioned how her friend, Julia, estimated that in the USA the minimal salary was $3000 per month, so how could this possibly be, she asked? I excused her naivety, but suspected that her writing was now being advised by Julia who she mentioned out of context one other time. I asked who Julia was, but the question simply hung out there without an answer.
Today is the day I am scheduled to send her $1500!! (I'm not doing this, obviously, but I am using the tools on this website to gather more information on her while contact continues between us.)
Olga gave me a breakdown on the costs for travel which included cost of documents, air fair, etc., with the promise that the day the funds are received that she could be with me within 2 weeks.
Olga wanted the funds to be transferred to her in what she called a Swift transfer. The name she wished to receive the money by is what led me to your website.

Emails from Olga Aleksandrovna Iangabysheva to William (USA)
William today I have come to library to read through your letter, but you have not written to me, tell to me, what for you wrote to me? If you now do not answer my letters. Why you do not appreciate time of other people, it is a pity to me, that I waste time on expectation of your letter. I shall be glad if you will want to continue our dialogue.

Good afternoon William! I am glad to that you have written to me. William Tell to me why you have not answered my questions? I in fact spoke you that it is important to me to know about your purposes and about your intentions. I thought that you will tell to me about your purposes and for what you search from our acquaintance. I hope that you will answer my questions. Otherwise we do not need to continue dialogue.
William today I would like to tell more about me. About my purposes and plans. I think that it will be interesting to you to learn more about me and my life. To me of 29 years. I now am in such age, that I do not have time for games and other. I search for the man with which I could create family. William I am very tired that which men I met all searched only affinity and had no what serious intentions. William I live in Russia. I live in city: Megion. And where exactly you live? How your city refers to? William I would like to ask you, you are frightened with our distance or not? Simply I do not see what problems because of our distance. I do not think that it
Read more