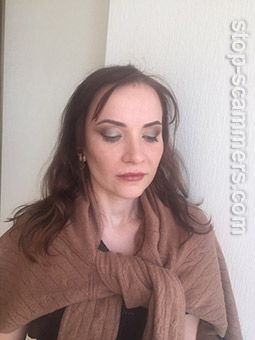 REPORT N1 (added on August, 7, 2017)
Michael (USA)
Maria initiated contact with me on VK, the same website I was corresponding to her supposedly Relative Cousin Sister. Maria and I corresponded For approximately 1 year. Her attitude changed towards me while she was communicating to me on VK. Maria became persistent about me contacting her on Skype and she claimed it is free of cost to me. When I informed Maria that I did not have the funds to do so, and that it is not free of cost to me, she claimed I was not of the qualities of a man she wanted and she persistently put me down as a person and that I was not what she wanted for a future husband. She was concerned about if she was in USA and married to me, that she may have health problems. I asked her about health problems she had and she said she does not talk about it because I have no money for Skype. Ha! What a JOKE!
At first when I met her in person, she requested a bottle of perfume. Like a ******** I got and gave her an expensive bottle of perfume and gave the perfume to her when I met and saw her. She requested for money on several occassions while corresponding with her on VK while claiming that she did not have money for food and to fix her cellphone. She claimed she needed money to learn how to drive so she would know how to drive here in USA when she married me. She claimed to need a lot of money for English lessons so she would know English well. She already could speak and write English well, almost as good as I can write or speak. She claimed to need money that I sent her US $120.00 via Moneygram. She had written me that her stepfather was in Russia, not in Ukraine, and was getting a heart surgery, and she did not have money to eat. I sent the moneygram in the name of Maria Novaya. She wrote me immediately and told me she could not pick up the money because or her name is not Maria Novaya, but is Mariia Ieromenko. I told her a photo copy document was necessary in order to get the name changed and corrected in the MoneyGram system. Maria sent me of what appears to be a genuine Ukraine Passport with supposedly correct information about her. Again I sent her US $50.00 via Moneygram. Maria did send me a nice card in the postal mail for St Valentines day for this year and She sent me a small package with a shirt of small value. She claimed she loved me, but was very persistent in me having Skype capability with her to communicate and for her to show me her body. Probably another scam ploy to get me to pay money for her showing her body. I did not engage in any activity with her thru Skype as she was adamant about having Skype communication with me and because it was her need to share and show here body to her man. Maria at times would act concerned and genuinely concerned about our relationship but at the end, she decided to have relations with other men who want Skype relations and men, not a man, that are of Russian or Ukraine descent or nationality. She claimed to have free communication via Skype to her Uncle here in the United States in New York, and She claimed to have free skype to her communication with another lady friend here in the United States. She blew me off and blocked me from communication on VK and told me I was wasting her time. and that she did not want to live in USA, and that she did not want to marry an American. And that she was dreaming about relationship(S), not a relationship, from and about a Ukraine Man she Well, so much for a love relationship with Mariia Ieromenko as she ultimately ended the relationship claiming and insisting that I must change my internet provider and only had to pay extra money when talk Skype to Skype with her. I got scammed and conned big time by Mariia Ieromenko! That is the reason of why I write this story so no other American or Russian Or Ukrainiane man whether here in USA or in their own country, will get disrespected and scammed by Mariia Ieromenko.
Created: 2017-08-07    Last updated: 2017-08-07    Views: 1491