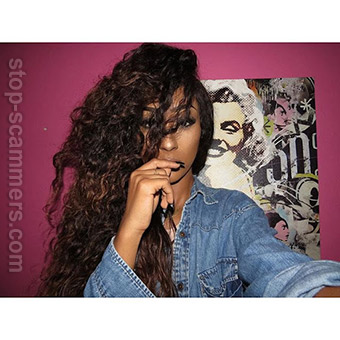 REPORT N1 (added on August, 10, 2017)
John (Brazil)
She contacted me at Mingle and we moved to Google hangouts where she told me that her ex boyfriend had tied her up and beat her, he also sent his friends to beat her up. She told me that she would never send **** pics on the net as she had done it once and the guy that she sent them to had posted them on the internet, so I should not ask for them.
She soon wanted to come to me in Brazil and asked me to send her $2700.00 for her air fare by Western Union or Moneygram.
Searches on the net showed that she is using stolen photos.
I eventually did ask for a personal photo of her and she sent me an open ****** shot which when I searched I found to be a photoshop pic of a **** star, the heads had been changed.
REPORT N2 (added on March, 27, 2018)
Brad (France)
Known scammer.

Emails from Victoria Diegel to John (Brazil)
Hi, John My name is Victoria Shirey, I'm seeking for a soulmate on here, if you dont mind You can Test me + One Two Four Zero Four One Six Nine Two Two Eight or Mail me on Iloveyou so much 1979 at yawho durt ***

My name is Victoria Shirey Diegel , 33yrs, old single never married with no kid I was Born and raised in Baltimore Maryland USA but presently in Peoria Ill, I live with my Uncle down here his name Wayne Diegel ,I went to Methodist college of Nurse and allied health in Omaha Ne, graduated in 2004 and i worked as a nurse in St Francis Medical hospital but it takes all of my time and since have been a kid my dream job is a Designer so I decided to stop working as nurse and be a self employed Fashion designer ,I lost my dad when i was 10 and lost dad before coming down here
Tell me everything about yourself
What I need to tell you first Vicky is that I am sterile so if you are thinking of raising a family you need to look somewhere else love, If you are happy with the fact that I can't give you kids I will tell you all about me, Don't want to waste your time love

Well, I will say as for as you are honest, decent, loyal, doing your best for me and having time for me and not cheating on me and as I told you earlier I hate LYING its the most disgusting thing to me cause my ex lied to me as have experience it and I don't want such to ever repeat its self in my live, and about livi
Read more

Emails from Victoria Diegel to Brad (France)
Hello, I hope you are doing good,

my name is Mabel am 34 years old am fair in complexion, am from Michigan, Westland, but now am in West Africa, am single with no kids, I use to read my books at my leisure time, the game I like best is NBA and football, am a free minded lady, am seeking for a good relationship, what I like and what I dislike, I don't like a man who lie, betray and who fall fail his promise this what I dislike, I like a man who is lovely, kind, hard working, care and good in bed, this what I like.

I will be glad to hear from you soon
have a nice day.
Mabel