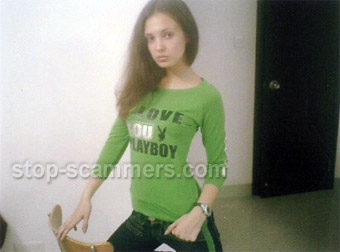 REPORT N1 (added on August, 5, 2005)
Larry (USA)
Scammer contacted me through dating site, she sent e-mails to me almost every day. After four e-mails, she is talking about how much she loves me. Within three weeks, she says her "dream" is to have my baby, and
she indicates she wants to live with me in USA. She has no phone and does not give her address. She is moving too fast for me, and I become suspicious, and I put her name in google search, and I read similar letters she wrote to another man who lives in the UK. Before see can ask me for money, (she was checking total costs), I confront her about her dual identity, writing similar letters to another man, and that other men have reported receiving similar letters, including two friends. They also
report that she also uses the name Anastasia Ivanova, even though hse have been lacklisted under that name. The men also reported they have copies of her letters as proof. She asks for money to come to the US and says we
should not go to Russia to meet her. The address she gave them in Yoshkar-Ola had the wrong postal index for that city and she claims to have no phone. She also says she is a doctor at first and then suddenly she works in a bar. I have been fortunate to not hear from her again after
I exposed her!!. I expected to not hear from her anymore, cause I made it clear she was not getting any money from me for anything.
REPORT N2 (added on September, 6, 2005)
Renato (Italy)
This person wrote to me costantly every couple of days for 4 months.Tender and sweet, jolly and communicative, I have considered her a lovable female with amazingly hot temper. He took aim to ****** me, with romance and
exciting promises of "help".., and professing their undying love for me...also specific for family.!!
Believe or not to believe!! I tried to belive hoping to explain we ourselves, more deeply, at our meeting in Hungary planned for 9 August last. In the meantime, I send her some money, at times expressly requested, such as for mother, for study, for problem of computer..!
Clearly also for the journey in Hungary...where, against my, I am still again waiting for...her!!!????
At once, I took the responsability for a possible failure.. but till in the end I have wanted to believe, naivly, that, with me, her will not be a scammer..!
I think that this is an abitual job of a mean-spirited, cheat
person..or, possible, scam-Agency..???
Created: 2005-08-05    Last updated: 2006-07-31    Views: 905