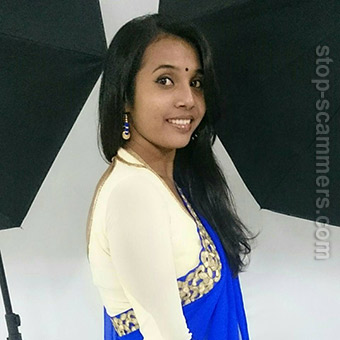 REPORT N1 (added on August, 29, 2017)
John (Brazil)
Afrah first contacted me there after we had been "matched" by Mingles computer. She wrote to me in fluent Portuguese and her profile said that she lived in our Brazilian Capital, Brasilia, bad move, Brasilia is a hive of corruption. Her profile also described her as being of the Muslim faith.
I contacted her at Mingle and told her that I was too old for her to consider romance and she wrote back laughing saying she had chosen me as I was special, ****** *****, lol.
I gave her my mail address and we began to chat there, all chat in fluent Portuguese except for a couple of paragraphs in Arabic, (all have been translated).
According to your data bank Brazil only has four scammers, I can assure you that you now have five, lol.
Sad really because here we are more used to Assassins, Bank robbers, corrupt Politicians, Drugs and Arms Trafficking, now with Brazil accepting Refugees from Syria and the Middle East it seems that we are about to get scammers as well.
Afrah sent me photos of her of which I can find no trace in mirror image searches, sadly for her she also sent a photo of a big box of money, US Dollars. It was a photo of cash found at a Mexican Traffickers house some years ago.
At this stage of the game she tells me the usual scammer lines, husband beats her, treats her with the usual Muslim disrespect for woman but she found his money and want's to rob him out of revenge and come and live with me in perfect Muslim/ Christian harmony, lol . The husband has a substantial $2,000.000.00 tucked away and fortunately for Afrah she has a crooked UN Diplomat who will get her stolen cash to anywhere in the world for her. The plot thickens!
The same day that we met she dispatched the treasure chest to me by a company called 'NCI' This company doesn't exist but it sent me a dispatch note and a tracking number, it also had Afrah's address number 12 Mohamed Street, Damascus, Syria, Google Earth reveals that this address doesn't exist either, there is however a Mohamed Al Ashmar Street in Damascus.
I wrote and told Afrah that her package was on it's way and that tracking had told me that it would be delivered the next day, I asked her to get the first available plane to Brazil.
This morning I received a mail from the Transport Company informing me that the box had arrived at Sao Paulo International Airport and that I would need to pay a customs charge of 8500.00 REAIS, Local currency, for an International delivery company their knowledge of the English language is disgusting, lol.
I wrote back to Afrah telling her that the box was here and asked her to send me a photo of her passport to confirm for me that she was sincere, I wrote in Arabic to see the result! She replied in Arabic, very clever this one, and I received more communications from the transport company asking me for payment.
I requested that they mail me with their bank account number and branch so that I could pay them by computer transfer, the company kindly informed me of this number and confirmed that our scammer is Brazilian. The account is in a woman's name (Pure Brazilian name) and the account is with the same bank that I actually use, I could get addresses of our scammer next time I speak with my manager.
I now told Afrah that I distrusted her and in the usual Bell fashion asked her to prove her love with some intimate photos, she told me that her husband had confined her to the house and she had no camera.
CONCLUSION
Afra Hamden is in fact Elisabete Lima Uchoa who lives in Brasilia or Elisabete Lima who lives in Uchoa, Sao Paulo, she is Muslim and has shown extreme intelligence in this scam attempt, the crimes she has attempted to commit, ie, theft of hubbies cash, hand amputation, her attempted adultery with me, flogging in the square and then being ****** to death, lol.
Name: Elisabete Lima Uchoa
Agency: 0845
Account: 09854-0
Cpf: 29296899869
Bank: Itau Current Account

Romance scam letter(s) from Afrah Hamdan to John (Brazil)
Hey, your profile caught my eye. I think you fit my kind of man. Can we get a chance to meet each other?

Hahaha I do not think so, in fact, there is something important that I would like to discuss with you, please can you send me your e-mail address? It is important thank you for your reply.

Something important, Hmmm, I hope you want to run away together and live happily ever after, hahahaha, I started packing my bag, lol