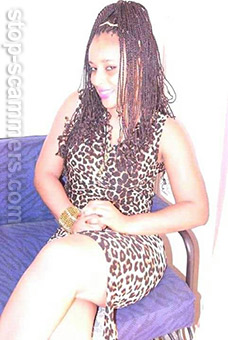 REPORT N1 (added on September, 19, 2017)
John (Brazil)
She is a scammer and even more serious a blackmailer. I accepted her request and began to chat via facebook messenger. She asked me my age and I told here 71 years, she told me that she was 31 years but according to her facebook profile she is 27 years old.
Sanata seemed very shy and was of few words just' yes, ok, no and really?' She told me that she was unemployed and was supported by her family. At some stage early in our conversations I asked her if she could cook and she told me that soon she would be here in Brazil to cook for me and that she would like to visit Brazil. She also told me that she was poor and wanted to start her own business selling dresses but had no money for this.
Sanata sent me lots of photos, all old photos I believed so I asked her to take a selfie for me, she told me that her phone was no good and she would send me good photos when she had a good phone. Later in the conversation she told me that she had an airtime problem and had borrowed 5000 French Francs from a friend. She asked me to help her with cash and I told her that I had been scammed before and that I was loathe to do this, she told me that she was in love with me and kept pushing me for money. She sent me her address and then asked me to send her cash by Western Union. I told her that I would help if she proved that she loved me by sending me a sexy photo of her, she said that she would do that.
She later admitted that her photos were old and told me that if I sent her the money to buy a smartphone she would take whatever photos I asked her for.
She then asked for my whatsapp number to do this and she gave me hers. I tried this number without success, she wasn't registered at this number at whatsapp.
The photo was never sent and I told her that I would not send her any cash and I blocked her at facebook messenger.
I then received a call from her at whatsapp from a different number, she told me she had borrowed the phone from a friend. She sent me lots of abuse, and threats that the local witch Doctor would cast a spell and kill me, she even sent me photos of him, lol. She also threatened to post my photos (the most sensual one is of me sunbathing on the beach, lol, a rather nice photo in my opinion) on the internet and make contact with my facebook friends.
I lived in a small African Village for some years and I know about these secret societies/voodoo/witchcraft of theirs so I wrote her a message in bespoke Themne language which simple says 'what will be will be' she replied immediately telling me she knew about the society that I was talking about.
I blocked her at whatsapp but somehow she managed to call me again and she then told me that she was from a rich family and didn't need my money. The borrowed phone she was using now appeared to be hers as she was calling me with 24 hours per day. I again asked her for a selfie on this phone but she refused to do this until I sent her money.
The threats, photos of African Black magic against me and abuse got worse so I asked her how much she wanted to just leave me alone, she came back with the price of $2000.00 promising that I would never hear from her again once she had received the cash.
I still felt that I could find out more about this scammer and continued our conversation until she half admitted that she was a guy but wasn't interested in a homosexual relationship with me.
Very dangerous this girl/guy, very clever as well, but greed was her/his downfall.