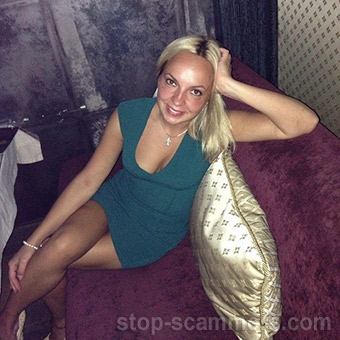 REPORT N1 (added on September, 10, 2017)
Graham (England)
I received email from Polina saying we met on match.com but I didn't remember meeting but gave benefit of doubt, she said she was a Russian policewoman and had photo with uniform after we emailed she had said wanted to visit me for holiday we agreed 4weeks I sent her ?175 for help paying her documents coz she said earlier she can buy flights but the she asked for substantial help paying for flights when I very gently and politely said not possible because and true my passport was so old and torn it became rejected by post office she despite saying she want to spend life with me etc simply vanished once realised no money will be sent...I also sent present to her addressed the tracker confirmed delivered successfully but she said lost in post.
Created: 2017-10-10    Last updated: 2017-11-16    Views: 1385