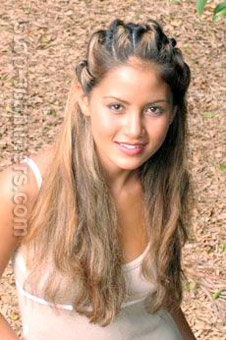 REPORT N1 (added on August, 16, 2005)
Yahya (Jordan)
I have met this girl online while i was looking for someone for Marriage..i sent her msg and she started to sent me back and we talked on yahoo messanger for 1 week,, she started to say that she lost her father when she was 4 years old, she said that she really wanted to visit me cause she thinks am an honest person.. at the start she didn't ask for money,,she said that she want to send me her money order so i can cash it for her and send the cash for her so she can buy a ticket and come to see me .. i kept waiting for her order but never arrived so she started asking me to send her the ticket fee and she will pay me later when she is here, she kept pushing for the money till i sent her 700USD ,but she asked me to send them to her freind adress and his name was AHMED ADEBAYO and that he works in MoneyGram in uk Oxford and his ZipCode is OX421G..she gave me his mobile number and i talked to that guy for many times[his mobile number is 0023414768550] later it turned out that this number is in nigeria..he told me that she really like me and that she wants to come to me,,after i sent the money something weird happened,,,she went off for 2 days and when i called back ahmed and he said that she is sick and the doctor can not release her until she pay her doctor... they even made me to talk to the doctor but later i found that there is no doctor,,its was Ahmed him self,,so they both started to ask me for another 400USD for the doctor or she will not be able to come at all unless she pays the Doctor...i was really confused about sending her the money or not..so i started to look for this person on google and i found that AHMED ADEBAYO or Ahmed Johnson is a very known scammer,,,now i'm trying to call him all the time but no one answer or someone always answer my call and says he is in ameeting.i really trusted this woman but it turned that she is abig scamer too.
REPORT N2 (added on January, 12, 2010)
Richard (USA)
This one contacted me saying she was in Illinois and her friends were going to pass through to see their boyfriends in Florida. She liked me and wanted to vist, but they needed some gas and expense money. I told her she would get nothing without me knowing her better and I need to see her State ID or Driver's License to confirm who she said she was. I even offered to pick her up. She sent me a fake US Passport Card and a few photos. You can guess what i told her in the following email. She is gone, but not forgotten.