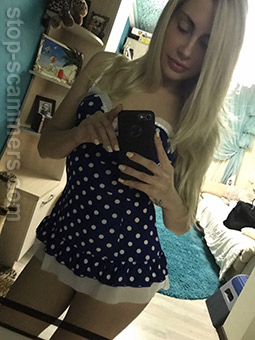 REPORT N1 (added on December, 20, 2017)
Stewart (USA)
Spoke this person for a month, she seemed sincere and sweet. Convinced me to send her $1,200 for a RT plane ticket. I did, then she sent me a copy of the fake tickets and an Ukrainian Immigration Letter stating that the Ukrainian Government requires all visa holders to carry $2,500US currency to depart the Ukraine. I contacted the Ukraine embassy in NYC and they assured me that was not a requirement. They only need a valid passport and USA visa to board an aircraft.
REPORT N2 (added on February, 1, 2018)
Jimmie (USA)
She will tell you that she has met someone before who bought her airplane tickets with stolen Credit cards and she was not aware of it. Then when she showed up at airport in Kiev because airport in Donetsk is destroyed the police took her away from there. She stated that she also stated that she has her passport and active visa already and sister lives in Jacksonville, Florida with her American husband and that is why she has been to US before. She stated that she had to pay Ukraine police and airfare to Credit card company to keep from going to jail. She will say for that reason she will not let anyone buy her tickets with credit cards. If you are suckered like i was to send her airfare she will go to site www.pilot.ua and book flight and give you a picture of confirmation number. I hesitated a few days before sending it because I did some images searches and found her on You TUBE as DJ Marina German and doing a pole dancing routine. In my defense she told me she did all this stuff from the start. Since I hesitated for a few days it gave her the opportunity to come up with a another reason for you to send her the money. She stated that since it was a few days between when she checked the price of the ticket and when she actually went to purchase the ticket that it cost more than she said and that she borrowed money from her Cousin (sister) to buy it so it did not cost more the next day. She said she would have asked me first but the lady at the agency said it would be more tomorrow because it was getting closer to the day that we agreed for her to come to the States. She will also state that she needs the money for to give back to her Cousin (she calls her cousin sister - when i asked why she stated that is something they do in Ukraine and me being ignorant of that culture a little did not know any better). The difference between the initial price and the price on the receipt was 370-ish dollars. Then she will go oh and we never talked about how she is going to get to the airport. She also states that because of the guy that bought her tickets with stolen CC's and the humiliation that she endured she does nto want to go to Kiev Airport like i suggested. She ants to go to Odessa which is 731 km or 12hrs away. I suggested train, bus or privets charter and she had really reasonable excuses as to why that will not work. I said what about your cousin\sisters husband? pay him a 100$ to take you and she stated he couldn't because of work. She wanted to take a taxi and the last time she did that cost 300$ but that was awhile ago so 350$ should do it though. Now I am like ok she is scamming the **** out of me but I am already 800$ into this **** and I am going to go for it because my curiosity is getting the better of me to see how much more and how much longer she was going to try and get out of me. So the 800 + 720$ is less that a weeks salary for me so it was not going to **** me and to me I had to know. I sent her the 720$ after i went to airline and it showed booked flight in MS Marina Kovalenkos' name. So she followed through on part of it but I know she was going to cancel the flight within 24 hours to get a refund. Sure enough she did. As of 1/30/18 this is still going on and she is still pretending to come because she does not know that I know the booking is no longer active. Confirmed by the airline a couple of ways no longer active. Apparently so everyone is aware if you go to www.pilot.ua and book a flight you do not have to pay for it totally for it to show as booked on the airlines website. I know I probably should not have sent that second set of money but I figured It might keep this **** preoccupied with this sucker and save some other dude from getting it. She is still active on Mamba.
Created: 2017-12-20    Last updated: 2018-02-01    Views: 1579