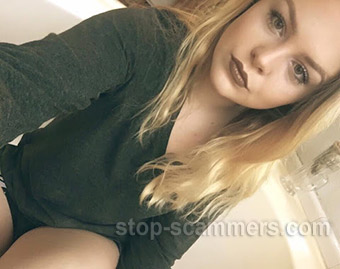 REPORT N1 (added on January, 5, 2018)
John (Brazil)
Very clever scammer this one, all through our conversations she was almost perfect, just a few little mistakes gave her away, the layman or innocents would have passed these mistakes by I think. I am certain from our text messages at hangouts that this scammer is a woman. She asks women's questions if that makes sense? It is possible that the photos she sent me are her own and that she is a member of some Military group.
Sgt Beth Hannan, serving in Aleppo, Syria and has a page at Mingle 2. She says she is divorced and has a six year old daughter, her locations around the States are in California, Texas and Arizona, she says she was trained at Fort Bliss, Virginia, sadly for her there is no Fort Bliss in Virginia, only New Mexico and Texas. There is no trace of her photos at Google or Yandex Images. I was certain that she was a scammer and I asked her to obtain leave and spend Christmas with me in Brazil. She told me that I would need to write to her General and request leave for her. She gave me her Generals name and a branch of the Military payments office to write to, The General does not exist however the payments office does.
I sent a request for her leave to the department she sent me and my Mailtrack tells me that the request was opened by her, Beth Hannan.
Leave would be granted but I would have to pay for her leave and there were a series of options the most expensive being six months leave in the sum of $4000.00 to be sent by Western Union.
Created: 2018-01-05    Last updated: 2018-01-05    Views: 1443